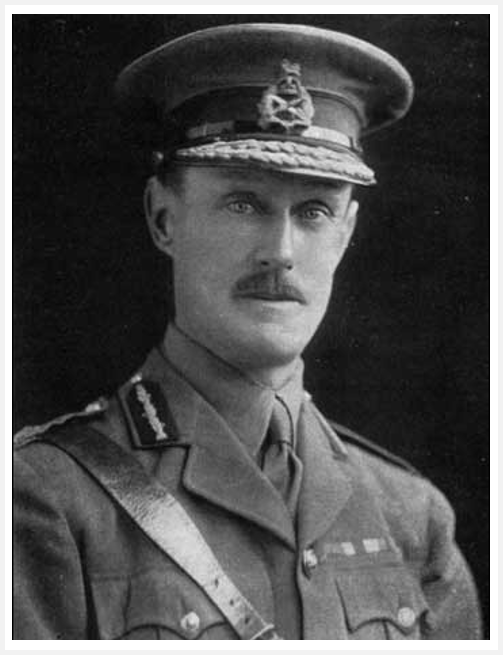 His father died in 1880, leaving little money, and Godley was then sent to the United Services College, Westward Ho! (c.1881-1885). In 1886, one year after entering the Royal Military College, Sandhurst, Alick Godley, as he was known, became a subaltern in the Royal Dublin Fusiliers; his uncle was a major in the regiment. He soldiered in Ireland for seven years, frequently hunting, playing polo, and supplementing his low pay by training polo ponies. Army demands were confined to drill and periodical field days. After taking a mounted infantry course in 1895 he was appointed mounted infantry instructor at Aldershot. The following year he went with a mounted infantry battalion to Africa to take part in the Mashonaland campaign. He received a brevet majority and returned to Aldershot in 1898 where he commanded two mounted infantry companies. Training still emphasized drill and marching. On 17 September 1898 he married Louisa Marion Fowler (d. 1939), of co. Meath, with whom he shared a love of hunting. Godley’s autobiography justifiably claims she was ‘the most important influence in my future life’ (Godley, 27): she actively supported him in his determination to achieve high rank. There were no children.

Godley entered the Staff College, Camberley, in 1899, but before finishing the course went off to South Africa to assist in raising volunteers. He was at Mafeking when the South African War broke out, and during the siege commanded an attack that failed because he had not ascertained the forward situation. This lack of command understanding was to be demonstrated again in the First World War. After the relief of Mafeking he took part in operations in the Transvaal, including commanding the Rhodesian brigade as a brevet lieutenant-colonel. He was posted to the newly formed Irish Guards in 1900 and was in 1901 appointed deputy assistant adjutant-general and commander of the Mounted Infantry School at Aldershot. In 1904 he witnessed German army manoeuvres; he recorded that he was ‘not much impressed’ (Godley, 108). He was promoted colonel in 1906 and appointed general staff officer, grade 1, in the 2nd division at Aldershot, where he became responsible for training and staff work in the field. By then training had taken on a more practical character.

In 1910 Godley was offered the post of general officer commanding the New Zealand forces with the rank of temporary major-general. His acceptance was influenced by the advice of senior generals and, almost certainly, his dependence on army pay. New Zealand had recently legislated for a universal compulsory part-time military training scheme to replace the small and outdated volunteer force. When the First World War broke out in 1914 it was due to Godley’s determination, experience in staff work and training, insistence on efficiency, and outstanding administrative ability that the New Zealand army was capable of being integrated with other British forces. Given the limited time available it was a major achievement. Godley was not responsible for the serious lack of capable senior officers; he did, however, bear responsibility for his choice of staff officers throughout the war.

When the New Zealanders arrived in Egypt late in 1914, Godley ensured they trained hard. He had set them the same standards of smartness, obedience, and musketry as were required of British regulars-not necessarily the most useful priorities for the coming campaign at Gallipoli. There he commanded the composite New Zealand and Australian division, and in October 1915 the Anzac corps. The troops considered him out of touch, and blamed him for ‘Godley’s abattoir’, where Australian light horse units were slaughtered in successive charges. The appellation was not wholly unjustified, having been earned by Godley’s rigid compliance with orders and his failure to take changed circumstances into account. His plan to seize Chanuk Bair was too complicated for the rugged and poorly reconnoitred terrain. Moreover, during the battle he allowed himself to be diverted from a crucial front-line conference that he had himself called.

In 1916 Godley took command of the 2nd Anzac corps in France. It played a major part in the successful capture of Messines Ridge in June 1917. Casualties would have been lower, however, if the corps had allowed one of the attacking brigades to be withdrawn once the objectives had been secured. Then came the 2nd Anzac’s attacks on Passchendaele Ridge. The first, on 4 October 1917, on Gravenstafel spur in favourable weather, was a success. By his own account, Godley was prepared to exploit his success by going on to take Bellevue spur, ‘but the army commander, uncertain of the situation elsewhere, would not allow it’ (Godley, 224). On 9 October British divisions of the corps attacked, despite rain and shelling which had created a vast, grotesque mud-bath. Haig’s diary records that Godley specifically asked that there be no postponement (Warner, 119). The advance achieved was minimal and many casualties were abandoned to die in the mud and rain. On 12 October there was a third attempt. It too failed. The mud had nullified the affect of artillery on the barbed wire. The two New Zealand attacking brigades suffered 2735 casualties.

When the 2nd Anzac corps was disbanded in 1918 Godley went on to command the 22nd corps and the New Zealand division elsewhere. He still retained overall control of the New Zealand expeditionary force (NZEF), with the encouragement of his immediate subordinates and the support of his minister in the New Zealand parliament. During 1918 he contributed to a series of victories. In July he was sent with four divisions to the Marne to fight successfully under French command, and in August he commanded five divisions in Sir Henry Rawlinson’s Amiens offensive. In September he was promoted substantive lieutenant-general. In November the 22nd corps helped in the capture of Valenciennes.

During 1919 Godley commanded the 4th corps of the army of the occupation of the Rhine. This was followed by a spell assisting Haig in organizing an officers’ association, spending four months in a sanatorium, and acting as Winston Churchill’s military secretary. He commanded the army of the Rhine (1922-4), where he used his diplomatic skills in reconciling French demands with British policy. He was then appointed general officer commanding southern command. Godley left the army in 1928, and spent the next five years as governor of Gibraltar, where he enjoyed maintaining amicable working relationships with Spain and resumed his hunting career with enthusiasm. He also published a volume of memoirs, Life of an Irish Soldier (1939). On his retirement he toured widely, including Australia and New Zealand in his travels. In New Zealand, as a guest of the government, he met former NZEF officers and laid wreaths at war memorials. In retirement he lived at Boxford Mill House, Boxford, Newbury, Berkshire; and he died on 6 March 1957 in the Acland Nursing Home, Oxford.

Godley admired the New Zealand troops he commanded. It is unfortunate that he neither said so, nor showed compassion towards them. A tall, spare, publicly reserved man, Godley was seen by his troops as stuck up, distant, and unfeeling. Those who worked with him closely, regardless of rank, knew his other side-courteous, courageous, fair, and, once his trust had been won, disinclined to interfere. His wife was no more popular. Although she was deservedly mentioned in dispatches for war work that included establishing and running a convalescent home for New Zealand soldiers, she was better known for observing them training in the heat and sand of Egypt, and for the apocryphal demand to her husband: ‘Make them run again, Alec!’ (Pugsley, On the Fringe, 75). Godley received many appointments (KCMG 1914; KCB 1916; GCB 1928) and was mentioned in dispatches eleven times. His career exemplified both the nineteenth- and twentieth-century army: the nineteenth by his courting of patrons (demonstrated in his surviving personal correspondence and volume of memoirs), and the twentieth by his administrative practices. It is doubtful, however, that he fully appreciated the realities of twentieth-century warfare.