Gibraltar Governor Alexander Woodford (Sir Alexander George Woodford), (1782-1870), army officer, was the elder son of Lieutenant-Colonel John Woodford (d. 1800), and his second wife, Lady Susan (d. 1814), eldest daughter of Cosmo George Gordon, third duke of Gordon, and widow of John Fane, ninth earl of Westmorland. Lord William Gordon and Lord George Gordon were his mother’s brothers. Major-General Sir John George Woodford was his younger brother. His father, John Woodford, was for some time in the Grenadier Guards. He served under General James Wolfe, and later took an active part in the volunteer movement of the day. He became lieutenant-colonel of the 6th fencible infantry (the Gordon regiment). During the Gordon riots, which his uncle led, he was the first officer to order the soldiers to fire on the rioters after the attack on Lord Mansfield’s house. 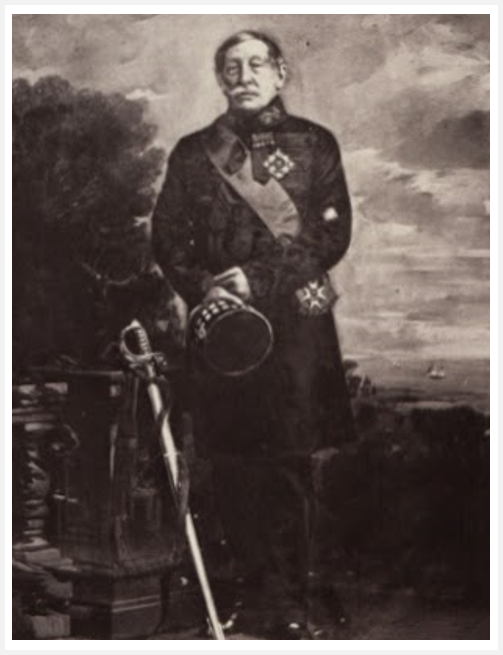 Woodford was promoted lieutenant in an independent corps and was brought into the 22nd foot on 8 September 1795, but placed on half pay the following year, as he was too young to serve. He was again brought into the 9th foot as captain-lieutenant of the newly raised battalion in 1799. He served with this regiment in the expedition to The Helder in September 1799, and was severely wounded on the 19th at the battle of Bergen. He was brought into the Coldstream Guards on 20 December 1799. In 1803 he was appointed aide-de-camp to Major-General Sir James Ochoncar Forbes. He rejoined his regiment to serve at the investment and bombardment of Copenhagen in 1807. He again joined the staff of Lord Forbes in Sicily and the Mediterranean as aide-de-camp from March 1808 to June 1810. From duty in London he joined his company at Isla de Leon for the siege of Cadiz in 1811, commanded the light battalion of the brigade of guards at the siege and capture on 19 January 1812 of Ciudad Rodrigo, at the siege and capture on 6 April of Badajoz, at the battle of Salamanca on 22 July, at the occupation of Madrid and the capture on 14 August of the Retiro, at the siege of Burgos in September and October, and in the retreat from that place. He commanded the 1st battalion of the Coldstream Guards during the battles of 1813 and 1814, including Vitoria and Nivelle. He was appointed aide-de-camp to the prince regent on 4 June 1814 for his service in the field, and aide-de-camp to the king on the prince’s accession to the throne. He commanded the 2nd battalion of the Coldstream Guards at the battles of Quatre Bras on 16 and of Waterloo on 18 June 1815, at the storm of Cambrai on 24 June, at the entry into Paris on 7 July, and during the occupation of France.

For his services Woodford was frequently mentioned in dispatches, and received the gold medal with two clasps for the battles of Salamanca, Vitoria, and the Nive, the silver medal with two clasps for Ciudad Rodrigo and Nivelle, and the Waterloo medal. He was made a companion in the Order of the Bath, military division, and was permitted to accept and wear the insignia of knighthood of the Austrian order of Maria Theresa and of the fourth class of St George of Russia.

Woodford was lieutenant-governor and commanded the infantry brigade at Malta from 1825 until he was transferred in a like capacity in 1827 to Corfu. He was made KCB on 13 September 1831, and KCMG on 30 June 1832, in which year he was appointed to the command of the forces in the Ionian Islands, and acted temporarily as high commissioner. He was appointed lieutenant-governor of Gibraltar on 28 February 1835, and governor and commander-in-chief on 1 September 1836, a position he occupied for seven years. The grand cross in the Order of the Bath, military division, was bestowed upon him on 7 April 1852. He became lieutenant-governor of Chelsea Hospital on 25 September 1856, and succeeded to the governorship on 3 August 1868 on the death of Sir Edward Blakeney.

Woodford married, in 1820, Charlotte Mary Ann (d. 21 April 1870), daughter of Charles Henry Fraser, British minister at Hamburg. One of the six lancet windows in the north transept of Westminster Abbey was filled with stained glass by Woodford in memory of his second son, Lieutenant-Colonel Charles John Woodford (1823-1857) of the rifle brigade, who was killed while leading a charge at Cawnpore during the Indian mutiny in 1857. Woodford died at the governor’s residence, Chelsea Hospital, on 26 August 1870, and was buried at Kensal Green cemetery on 1 September.