Gibraltar Governor Archibald Hunter (Sir), (1856-1936), army officer, was born in Kilburn, London, on 6 September 1856, the eldest son of Archibald Hunter (d. 1868) of Cannon Street, London, a cloth merchant, calico printer, and friend of Cobden, and his wife and first cousin, Mary Jane (c.1834-1905), daughter of Major Duncan Grahame, late of the 6th foot. Both his parents were from Scottish lowland families. Known to his family (and later to the army) as Archie, he was educated at Glasgow Academy (1869-73) and Sandhurst (1874-5), and on 27 August 1875 was commissioned lieutenant in the 4th foot (the King’s Own), joining the 1st battalion at Gibraltar. He quickly made his mark as a keen and efficient officer. From 1879 to 1881 he served with the battalion in Barbados, and from April 1880 to November 1882 served as adjutant. The battalion lost a tenth of its fighting strength in a yellow fever epidemic and was recalled to England. Hunter was promoted captain on 30 August 1882. 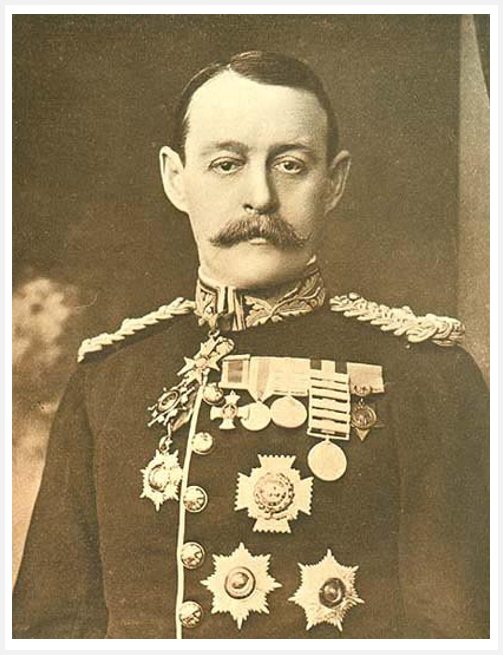 In February 1884 Hunter joined the new British-officered Egyptian army, and served with it until 1899, initially with the 9th Sudanese. He served on the Gordon relief expedition (1884-5)-when the Egyptian army was largely on the line of communication-working on transport, administration, and intelligence, and was for the first time in action. Then and subsequently he gained a reputation for bravery and efficiency. He was made brevet major on 15 June 1885. Hunter was severely wounded during a skirmish with Mahdists at Koshe in December 1885 (so missing the battle of Giniss) and was awarded the DSO. He commanded a brigade, and was again wounded at the battle of Toski on 3 August 1889, when the emir Wad al-Nejumi was defeated. On 17 August he was made brevet lieutenant-colonel, in recognition of his services. He was promoted substantive major on 15 June 1892, and obtained the further brevet of colonel on 6 January 1894.

From August 1892 to July 1894 Hunter served as governor of Suakin and the Red Sea littoral, and from July 1894 to November 1896 he commanded the Sudan frontier field force. On leave in Cairo he enjoyed prostitutes and, he wrote to his brother, ‘always got the clap’ (Hunter, 38); at Suakin he had an Abyssinian mistress.

In the 1896-8 operations which culminated in the recapture of Khartoum, Hunter was Kitchener’s right-hand man. At Firket, on 7 June 1896, he successfully commanded the infantry. He was promoted major-general on 18 November 1896, when aged only forty, the youngest major-general since Wellington. In 1897 he led the flying column which defeated the Mahdists at Abu Hamed on 7 August and went on to occupy Berber on 5 September. At the battles of the Atbara (8 April 1898)-when he rode into battle at the head of his troops-and of Omdurman (2 September) he commanded the Egyptian division with great ability. He was mentioned in dispatches, received the thanks of parliament, and was appointed KCB in 1898 (GCB, 1911). The Sudan War, and British press reporting of it, established Hunter’s reputation. G. W. Steevens, the Daily Mail’s brilliant correspondent, praised him as ‘the true knight-errant … short and thick-set … he is all energy’, and ‘renowned as a brave man even among British officers … one of the finest leaders of troops in the army’ (Steevens, 55-6). Back in Britain he was lionized and awarded military and civic honours.

On 23 May 1899 Hunter was appointed to command the Quetta division in India. However, in September, with war apparently imminent in South Africa, he was designated chief of staff to Sir Redvers Buller in case of war there, and left for South Africa with a contingent of British troops. He reached Durban on 5 October, before Buller had left England. Pending his own arrival, Buller ordered Hunter to join Sir George White’s staff. Hunter became White’s chief of staff and accompanied him to Ladysmith. Hunter wanted to join Buller, but White refused. He also refused, despite the urging of Hunter and French, to send his cavalry south. During the siege of Ladysmith (November 1899 to February 1900), with White despondent and largely inactive, Hunter as second in command had a crucial role: according to Sir Henry Rawlinson he was ‘such a splendid leader’ (Maurice, 49). He wanted more active measures. Early on 8 December he led a very risky, but lucky and successful, night raid to silence Boer artillery on Gun Hill: a brave but arguably unwise action for a senior officer in so responsible a position. He also had a key role in the defeat of the Boer assault on 6 January 1900.

Shortly after the relief of Ladysmith (28 February 1900) Hunter was promoted lieutenant-general and given command of the 10th division. His column’s advance over the Vaal at Windsorten and defeat of the Boers at Rooidam on 5 May contributed significantly to the relief of Mafeking and Roberts’s advance on Pretoria. In June Hunter succeeded Major-General Sir Ian Hamilton as commander of the columns in the north-eastern Orange Free State. Although he failed to capture de Wet he achieved the second great Boer surrender, that of General Martinius Prinsloo and more than 4000 men in Brandwater Basin on 30 July: the greatest haul of prisoners in the war, achieved with very low British casualties. He later commanded counter-guerrilla operations-including house and farm burning for resource denial and reprisals-in the central Orange Free State. Following trouble with an old wound and an attack of malaria, in January 1901 he was invalided home. Among the best British commanders in the war, he had enhanced his reputation.

From 6 May 1901 to September 1903 Hunter was general officer commanding the Scottish district. He was awarded honorary LLDs by Glasgow and Cambridge universities. In February 1903 he gave evidence to the (Elgin) royal commission on the war in South Africa, urging greater professionalism and the use of motor transport. Sometimes tactlessly outspoken, he criticized the naval gunners at Ladysmith, remarking that schoolgirls could have shot as well; following indignant naval protest he had to apologize.

Hunter commanded in India from 30 October 1903 the western army, then from 1 June 1907 until 29 October 1908 the southern army. He supported Kitchener against the military department and Curzon, assisted Kitchener in his Indian army reorganization, and enjoyed big-game hunting. On 8 December 1905 he was promoted general.

On 30 September 1910 Hunter was appointed governor and commander-in-chief of Gibraltar. On 1 November, with Kitchener as his best man, he married in London, a lowland Scot, Mary (known as Mazie), daughter of Hickson Fergusson of the Knowe, Ayrshire, formerly a Glasgow merchant, and wealthy widow of George Arbuthnot Burns, second Baron Inverclyde (1861-1905), formerly chairman of the Cunard Steamship Company. They had no children, and she died on 30 November 1924. Obsessive about cleanliness, and concerned for the efficiency of the fortress and the welfare of its garrison, in early 1913 Hunter offended Gibraltarians by regulations which resulted in shopkeepers losing trade and by publicly criticizing, ‘in plain, soldierly terms’ (The Times, 16), Gibraltarians as dishonest and insanitary: ‘this town is like the Augean stables’ (Hunter, 211). Following Gibraltarian protests, on Colonial Office advice the Liberal government recalled Hunter and made him resign in June 1913. Also in 1913 he became colonel of his old regiment, the King’s Own.

After the outbreak of war, in August 1914 Hunter was appointed commander of the Aldershot training centre, and in January 1917 general officer commanding-in-chief, Aldershot command, and trained men for the ‘New Armies’. He wanted, and repeatedly requested, a command in France. His Aldershot posting ended in September 1917. From 1917 to 1919 he was aide-de-camp general to the king, who wanted to make him a field marshal. He retired from the army in October 1920, though continued colonel of the King’s Own until 1926. GCVO (1912) and an Egyptian pasha, he had French and Egyptian orders.

In the December 1918 ‘coupon’ election Hunter was elected coalition Conservative MP for Lancaster. A conscientious MP, though not speaking in the house, he voted with the majority at the Carlton Club meeting (19 October 1922) for Conservative withdrawal from the coalition. He did not stand in the 1922 election. After his wife’s death, in his last years he lived in London and sought consolation in drink and Mrs Sinclair Westcott, a middle-aged Irish widow. He died at his home, 52 Draycott Place, Chelsea, London, on 28 June 1936 and was cremated on 1 July. Hunter was a brave and professional soldier, popular in the army, and a successful fighting general against both Mahdists and Boers. Yet away from war he sometimes lacked judgement and was unwisely outspoken. Given the opportunity, he might well have been an effective commander in the First World War.