Gibraltar Governor Charles Keightley (Sir Charles Frederic Keightley), (1901-1974), army officer, was born at Anerley, near Croydon, on 24 June 1901, the only surviving child of Charles Albert Keightley, vicar of Anerley, and his wife, Kathleen Ross. He just missed service in the First World War. Because of his ability he was accelerated in promotion from the outset of the Second World War, successfully commanding a division, corps, and army without having commanded a squadron or regiment. Having been educated at Marlborough College (1914-18) and the Royal Military College, Sandhurst, he was commissioned into the 5th dragoon guards in 1921, a tall, well-built young man with a direct yet friendly manner and a strong sense of humour. 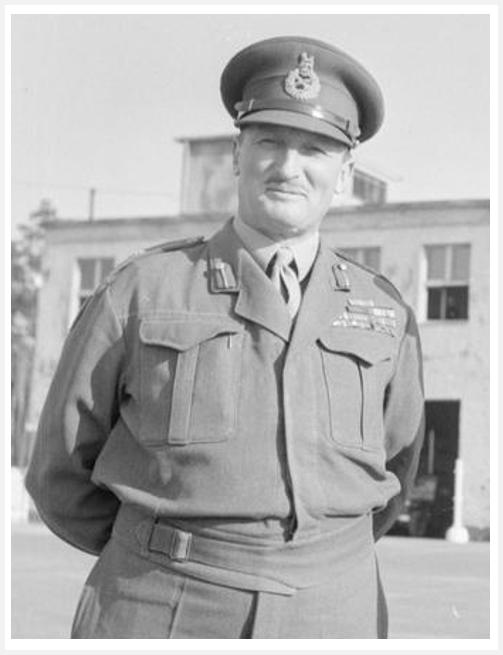 The regiment was then serving in the Middle East, where it was uneasily amalgamated with the 6th Inniskilling dragoons. Difficult days there were mitigated by removal to India and, later, operations on the north-west frontier. When the 5th Inniskilling dragoon guards returned to York in 1929 Lieutenant Keightley had made a name for himself as ‘an exceptionally capable officer who has excelled in a range of duties’. He had also excelled in polo, playing on occasion for the army in India. In 1932 he married Joan Lydia, daughter of Brigadier-General George Nowell Thomas Smyth-Osbourne, of Ash, Iddesleigh, north Devon; they had two sons.

At York the regiment was in danger of becoming a drafting unit for overseas requirements. It fell to a dynamic commanding officer with Keightley as his adjutant to preserve regimental identity and expertise, activity in which Keightley again enhanced his reputation. He passed competitively into the Staff College at Camberley for the 1934-5 course, unaware that his regimental service had ended.

After passing out with high marks in 1935 he became staff officer to the director-general, Territorial Army (1936), and brigade major to the cavalry in Cairo (1937-8) before returning to instruct at Camberley in 1938. At short notice, early in 1940, he was detached assistant adjutant and quartermaster-general (principal administrative staff officer) of 1st armoured division in France and Belgium. Among many critical problems he dealt with in the ensuing defence and withdrawal operations was the replacement of armoured vehicles in units, developing and implementing an embryo scheme which was adopted subsequently for the army as a whole. His work came to the notice of General Alan Brooke who drew him out of the administrative staff stream first to a brigade command and later in 1941 to direct, as a major-general, all Royal Armoured Corps training in the United Kingdom. When a force was formed to land in French north Africa, Keightley was chosen to command the 6th armoured division within it. He was then forty-one.

During the fleeting opportunities of late 1942 and the trials of 1943 Keightley demonstrated sound judgement in tactics and in the nurturing and driving of his command. By the time of the allied advance in Italy in the latter part of the year his standing was such that he was moved to command 78th infantry division when the opportunity for armoured warfare had diminished. He quickly won the support of this famous battleworthy formation, taking them through the Cassino operations in the following year, when he was promoted to command 5th corps. He continued no less successfully at this level, notably in the Argenta Gap operations leading to the final collapse of the German forces in Italy.

The war ended on 9 May. In north-east Italy, as elsewhere, Anglo-American relations with communist allies at once became tense. Southern Austria apart, Keightley’s corps embraced Venezia Giulia, Istria, and Trieste, all of which Marshal Tito threatened to annex. It seemed possible that forces of the Russian Balkan front under Marshal Tolbulkhin might support him. At the same time the corps fighting troops were substantially diverted in superintending half a million German prisoners of war, including some 40,000 Russians-Cossacks who had fought with the German army-and a growing swarm of refugees and stragglers.

The Yalta agreement required the return of all Soviet citizens in the Anglo-American zones to their motherland, notably from Italy the Cossacks and their families. On 13 May Harold Macmillan, resident political adviser to Field Marshal Alexander, informed Charles Keightley of British governmental policy concerning Tito’s claims in north-east Italy (and southern Austria) concluding briefly with the anticipated disposal of the Cossacks and other Russians in his charge. The two matters were interconnected: if 5th corps was obliged to thwart Tito’s territorial ambitions by force, he needed to clear his ground of prisoners and refugees. The requirement was pressed up the chain of command to theatre headquarters, from which it was confirmed that the repatriation should take place.

What was not made clear was the exemption of some ‘Russians’ from the claims of the Yalta agreement. For example, a fraction of the refugees assembled in north-east Italy had left Russia before the Soviet Union was established. Many of these were none the less exchanged as ‘Soviet’ citizens. All those returned were either killed outright by the Soviet authorities, or perished later as prisoners.

Long after the anxieties of May 1945 had fallen away concerning Tito’s threat to north-east Italy, suggestions were made that Keightley was precipitate in beginning the prisoner exchange and negligent in failing to identify those who had valid claims to remain as refugees in the 5th corps area. Following investigation, however, he was cleared on all counts.

With the end of the war and rapid demobilization, there were too many temporary lieutenant-generals for a shrinking army. Some retired, some reverted, but Keightley retained his rank, becoming director-general of military training in 1946 and military secretary in 1948. When Lieutenant-General Sir Brian Horrocks fell ill Keightley was sent to replace him, embarking on a series of commands-in-chief overseas for a span of almost ten years: the British army of the Rhine (1948-51), the Far East land forces (1951-3), and the Middle East land forces (1953-7).

Keightley’s time in the Middle East was prolonged because of the Suez crisis, in which he found himself in the worst of positions as the responsible army commander; with a shifting political concept, inter-allied plans of which he had no knowledge until a late stage, a protracted delay in mounting operations because of logistic factors, and the absence of a unified commander. From this misconceived venture Keightley emerged with credit. He coped readily with order and counter-order, insisting that any landing must be properly supported and maintained. In the political aftermath of the operations, his departure at last from the Middle East in 1957 was falsely rumoured in London to stem from mismanagement. The story took no root in the army and was dissipated by his appointment as governor and commander-in-chief, Gibraltar-a post from which he finally retired in 1962 after more than forty years of service. He had become a general in 1951.

Keightley persistently regretted that circumstances prevented him from commanding his regiment, and was proud to own that his ideas of soldiering had been shaped principally by it. Thence came his belief that every man, however junior, must be expected and encouraged to think for himself, whether alone or part of a team. Yet, though a cavalryman to the core, he acquired a remarkable insight into-not simply a knowledge of-the infantry art, the potential and the burdens of the infantry soldier. This was an important factor in his success as a commander.