Gibraltar Governor Charles O’Hara (c.1740-1802), army officer and colonial governor, was the illegitimate son of James O’Hara, Baron Kilmaine and second Baron Tyrawley (1681/2-1773). He attended Westminster School, and was appointed ensign in Colonel Edward Wolfe’s regiment, later the 8th foot, on 20 April 1751 and cornet in the 3rd dragoons on 23 December 1752. In January 1756 he became lieutenant and captain in the Coldstream Guards, of which his father was colonel. He served in Germany as aide-de-camp to John Manners, marquess of Granby, after Minden, then, with the brevet rank of lieutenant-colonel, was quartermaster-general in the short 1762 Portuguese campaign under Lord Tyrawley. In July 1766 he was appointed commandant at Goree in the new British territory of Senegambia and of the African corps, a unit largely of army convicts, pardoned on condition of service in Africa. He retained his position in the guards, however, and became captain and lieutenant-colonel in 1769 and brevet colonel in August 1777. 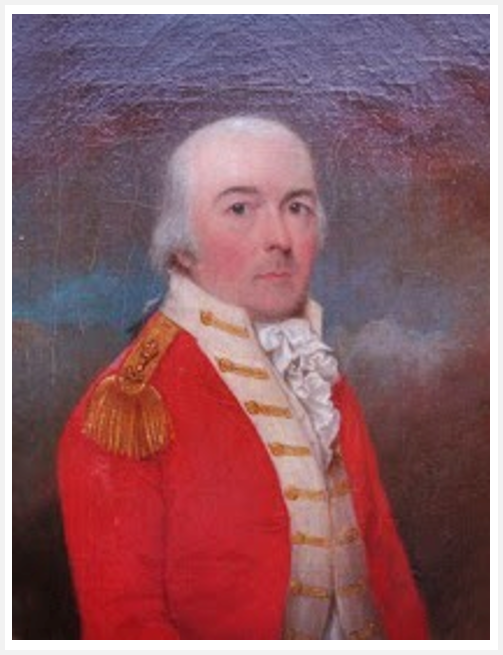 O’Hara served in the American War of Independence from October 1780, with the guards brigade of detachments from the three regiments. He was critical of the ‘Temporising-moderation & delay’ that ‘have governed our councils’, and he denounced British efforts to defeat the Americans as ‘feeble’ (September 1778, Hull University Library, Hotham papers, DDHO 4/18). His recommendation was for ‘Fire & Sword’ to ‘Ruin & desolate the remotest corners’ of the most rebellious provinces, so that ‘every Man Experiences in himself, & dearest connections, the Rude & mercyless hand of war’ (ibid.). This was hardly novel; many of his frustrated colleagues were urging the same course. But O’Hara’s conviction that a destructive war was the only option was based on a different logic from that of most of the ‘fire and sword’ school. He was convinced that no dependence could be placed on the loyalists, and was very critical of ‘the New Mode adopted of pursuing the War in this Country by Arming American against American’ (West Suffolk RO, Grafton papers, Ac 423/189). No American could be trusted, in O’Hara’s view, and he recommended a war of desolation not so much to terrorize the rebellious colonists into submission as to weaken the new United States for the foreseeable future (ibid., Ac 423/190).

O’Hara served in the southern campaigns under Lord Cornwallis. He was wounded at the battle of Guilford court house on 15 March 1781, and was with Cornwallis’s army which surrendered at Yorktown, Virginia, on 19 October 1781. O’Hara, as Cornwallis’s second in command, had to take the lead in the surrender ceremony, handing his sword to Washington’s second in command, Benjamin Lincoln (a scene depicted in John Trumbull’s painting of Yorktown). O’Hara remained a prisoner until 9 February 1782, when he was exchanged. He had in the mean time been promoted major-general (October 1781). In April 1782 he was appointed colonel of the 22nd foot, and the following month he took reinforcements from New York to Jamaica.

After serving as commanding officer at Gibraltar from 1787 to 1789, O’Hara became lieutenant-governor in 1792. In April 1791 he was transferred to the colonelcy of the 74th highlanders, then more lucrative than that of the 22nd. In October 1793 he was promoted lieutenant-general and given command of the British forces operating before Toulon. When the French attacked Fort Mulgrave on 23 November he was wounded and captured, and he remained a prisoner in the Luxembourg, Paris, until August 1795, when he was exchanged. Shortly afterwards he was appointed governor of Gibraltar. He became known as ‘Old Cock of the Rock’, and was described in his later years by Thomas Hamilton in his military novel Cyril Thornton (1827). O’Hara became a full general in January 1798, and in his last years was ‘very rich’ (GM).

O’Hara never married, though he was engaged in 1795-6 to Miss Mary Berry (1763-1852), author, whom he had met at Rome in 1784. He had two children each with two mistresses at Gibraltar, and he left his mistresses and children £70,000 in trust in his will. He left his plate and some other property, valued in all at over £7000 (much more than he left his brother) to his black servant, Moyse.

After a six-month illness and suffering much from complications caused by his old wounds, O’Hara died at Gibraltar on 21 February 1802.