Gibraltar Governor David Colyear, first earl of Portmore (bap. 1657, d. 1730), army officer, was baptized on 1 April 1657 in Brabant, the eldest of the four children of Sir Alexander Colyear, first Baronet (d. 1680), and his wife, Jean, daughter of Lieutenant-Colonel Walter Murray. Sir Alexander was apparently of the family of Robertson of Strowan, Perthshire, but with his father took the name Colyear and settled in the Netherlands, where he saw military service and acquired considerable property. 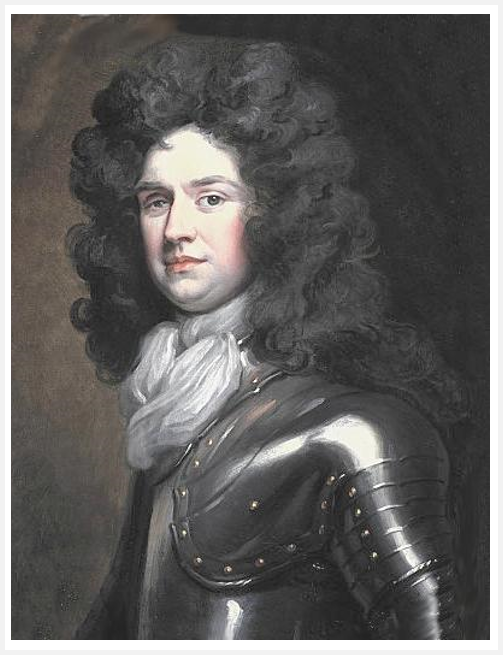 David Colyear entered the army of William of Orange as a volunteer in 1674 and served as an officer in his father’s regiment in 1676. Later he was promoted major. He succeeded to his father’s baronetcy in 1680, and in January 1683 became lieutenant-colonel in Mackay’s regiment. In the 1670s or 1680s he married Arnolda de Beyer (d. in or before 1696) of Nijmegem. Colyear lost the sight of his right eye in 1687 during a duel with Sir Peter Fraser. At the revolution he accompanied William to England and in late December 1688 was promoted colonel in command of Wauchope’s regiment. He served in William’s Irish campaigns (1689-91) and in October 1691 was appointed governor of Limerick. He was promoted major-general in June 1696. For his distinguished service in Ireland and in Flanders he was created a peer of Scotland, as Lord Portmore and Blackness, on 1 June 1699.

About August 1696 Colyear married his second wife, Catharine Sedley (1657-1717), the daughter of Sir Charles Sedley of Southfleet, Kent, and formerly the mistress of James II. She had been created countess of Dorchester for life in 1685, and received a substantial official pension. They had two sons. In 1702, at the commencement of the War of the Spanish Succession, Colyear was recommissioned major-general and served in the expedition to Cadiz and the attack on Vigo Bay. On 13 April 1703 he was raised in the peerage, as earl of Portmore.

He was promoted lieutenant-general in February 1703, and the following year he held the command of the forces in Portugal for a short period. In 1710 he succeeded Lord Galway as commander-in-chief of the forces in Portugal, and in January 1711 was raised to the rank of general. In 1712 he served under the duke of Ormond in Flanders, was sworn of the privy council, and was made a knight of the Thistle.

In August 1713 he was appointed governor of Gibraltar, and in October 1713 was chosen one of the sixteen representative peers of Scotland. In April 1714 he was appointed to the command of the Royal North British Dragoons (the Scots Greys), which he retained until February 1717.

However, disenchantment with the accession of George I led Portmore to dabble in Jacobite politics. Before the earl of Mar raised his standard at Braemar in September 1715 Bolingbroke attempted unsuccessfully to bring Portmore over to the Jacobite side. Further efforts were made by Mar during the rising to turn Portmore’s regiment, the Scots Greys, but without success; the regiment, under the acting command of Lieutenant-Colonel Sir James Campbell, was to play a key role in the suppression of the rising down to its last remnants in 1719. However, Portmore maintained and increased his Jacobite connections, providing military advice for a possible landing in England in 1716 as well as financial support. He relinquished the colonelcy of the Scots Greys in February 1717 as part of a move towards further involvement in the Jacobite cause. Rumours began to circulate among Jacobite leaders that he was preparing to leave England for the continent.

In late July 1718 he travelled to the Netherlands to meet Sir Henry Patterson, who reported to the earl of Mar that Portmore: was resolved, as soon as he returned to England, to disengage himself entirely of all engagements with the Elector of Hanover and the English ministry … for he says he has no satisfaction in England, where the discontents are general and particularly with the nobility and he spoke with great contempt of both the Elector and his son and said he thought the Restoration could not fail was there the least foreign resistance. (Stuart Papers, 7.113). However, Portmore did not sever his connections with the Hanoverians, and in the fullness of time he came to an accommodation with them.

When Gibraltar was besieged by Spain in 1727 Portmore embarked to assume command there. He arrived in April 1727 and saw the siege raised in June. He died at his family seat at Weybridge, Surrey, on 2 January 1730, and was buried there on 13 January. John Macky described him thus, at the age of about fifty:
‘He is one of the best foot officers in the world; is very brave and bold; hath a great deal of wit; very much a man of honour and nice that way, yet married the Countess of Dorchester, and had by her a good estate; pretty well shaped; dresses clean; but one eye’.

Portmore’s eldest son predeceased him; the second, Charles Colyear (1700-1785), succeeded as second earl. A great patron of the turf and a conspicuous figure in London, in his youth the second earl was known as Beau Colyear. The peerage became extinct on the death of the fourth earl in 1835.