Gibraltar Governor Frederick Walker (Sir Frederick William Edward Forestier) (1844-1910), army officer, born at the Manor House, Bushey, Hertfordshire, on 17 April 1844, was eldest of the four sons of General Sir Edward Walter Forestier-Walker (1812-1881) of Bushey and his first wife, Lady Jane, only daughter of Francis Grant, sixth earl of Seafield. His grand-uncle was Sir George Townshend Walker, first baronet. Educated at Sandhurst, he entered the Scots guards as lieutenant on 5 September 1862, and was promoted captain on 11 July 1865. In 1866-7 he served as aide-de-camp to the major-general at Mauritius, and from 1869 to 1873 was adjutant of his regiment. On 1 February 1873 he became lieutenant-colonel. 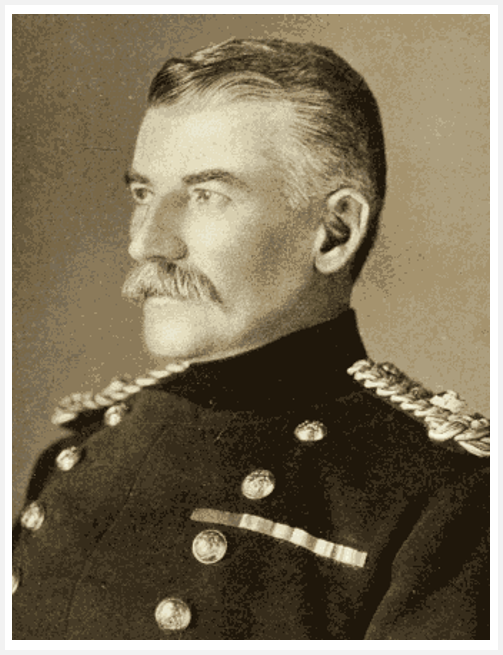 From 1873 to 1879 Forestier-Walker was on the staff at the Cape as assistant military secretary to the general officer. In that capacity, or on special service, he experienced much warfare in South Africa. In 1875 he served in the expedition to Griqualand West. During 1877-8 he was with Lieutenant-General Sir Arthur Cunynghame through the Cape Frontier War. He was mentioned in dispatches, and was made colonel on 15 October 1878 and CB on 11 November. In the course of 1878 he became military secretary to Sir Bartle Frere, the high commissioner. Throughout the Anglo-Zulu War, Forestier-Walker was employed on special service. In the early campaign he was principal staff officer to no. 1 column, being present at the action of Inyezane and during the occupation of Eshowe. Subsequently he was on the line of communications and in command of Fort Pearson and the Lower Tugela district. He was mentioned in dispatches.

Returning to England, Forestier-Walker was from 1 August to 14 November 1882 assistant adjutant and quartermaster-general of the home district, but from 12 November 1884 until December 1885 he was again in South Africa, serving with the Bechuanaland expedition under Sir Charles Warren as assistant adjutant and quartermaster-general. He was nominated CMG on 27 January 1886 and major-general on 31 December 1887. In 1887 he married Mabel Louisa, daughter of Lieutenant-Colonel A. E. Ross, late Northumberland Fusiliers, and they had one son.

From 1 April 1889 to December 1890 Forestier-Walker served as brigadier-general at Aldershot, and from 19 December 1890 to 30 September 1895 he was major-general commanding the British troops in Egypt. On 26 May 1894 he was created KCB. Subsequently he was lieutenant-general commanding the western district of England from 1 November 1895 to 18 August 1899. Shortly before the outbreak of the South African War, Sir William Butler was recalled from the command of the forces at the Cape, and the appointment was accepted at short notice by Forestier-Walker, who arrived at Cape Town on 6 September 1899. Placed in command of the lines of communication, he performed his important duties with thoroughness, and was active in support of Sir Redvers Buller’s advance. In 1900 he was made GCMG.

On 18 April 1901 Forestier-Walker handed over his post to Major-General Wynne, and embarked for England. On 7 July 1902 he attained the rank of general, and on 1 September 1905 became governor and commander-in-chief of Gibraltar. On 31 July of the same year he was nominated colonel of the King’s Own Scottish Borderers. Thomas Pakenham’s later description of him as ‘a charming nonentity’ (Pakenham, 96) was unduly dismissive. Forestier-Walker died from heart failure at Tenby on 30 August 1910, and was buried at Bushey.