Gibraltar Governor George White (Sir George Stuart White) (1835-1912), army officer, was born on 6 July 1835 at Rock Castle, Port Stewart, Northern Ireland, the second son of James Robert White, of Whitehall, co. Antrim, and his wife, Frances, daughter of George Stuart. He was educated briefly at Bromsgrove, at home, and from 1847 to 1850 at King William’s College, Isle of Man, and from 1850 to 1853 at Sandhurst. On 4 November 1853 he was commissioned ensign in the 27th foot (Inniskilling fusiliers), in which he served throughout the Indian mutiny on the north-west frontier, exchanging some years later into the 92nd (Gordon) Highlanders. In 1874 he married Amelia Maria (Amy; d. 1935), only daughter of Joseph Baly, archdeacon of Calcutta, and they had one son, James Robert White (1879-1946), and four daughters. She survived her husband. 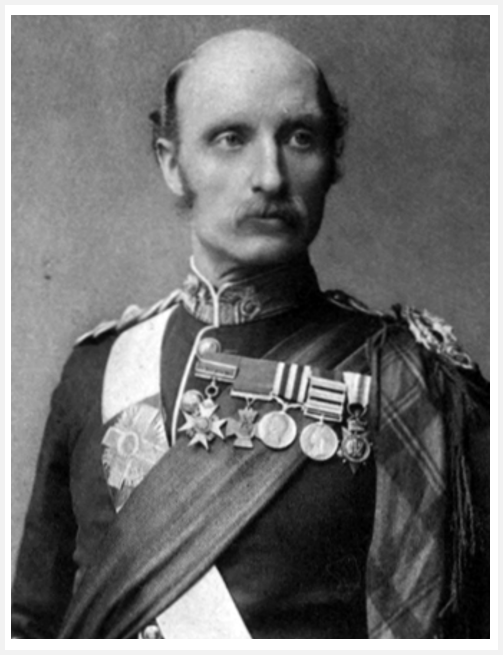 In the Second Anglo-Afghan War, during the advance of Major-General Roberts from Charasia to Kabul, Major White, in command of some 200 of the 92nd highlanders, managed by skill and courage to outflank the Afghans in the Sang Nawishta Gorge (6 October 1879), on the road from Jalalabad to Kabul, and so was largely instrumental in clearing the way for the rest of the force. Roberts wrote that much of the success of the operations was due to White ‘and at one supreme moment, to his extreme personal gallantry’ (Roberts, 2.223).

White was fortunate in attracting Roberts’s patronage during the Anglo-Afghan War. It was largely responsible for his rise to the highest rank after nearly thirty years of largely humdrum regimental duty. Thenceforward White’s advancement was as rapid and remarkable as it had previously been slow. He received the VC for his feats at Charasia and at Kandahar, and was made a CB and brevet lieutenant-colonel. In 1880 he was military secretary to the viceroy. After a short period at home commanding the 92nd, he went on active service to Egypt as assistant quartermaster-general (1884-5). In 1885 a British-Indian army under General Harry Prendergast invaded Upper Burma, and White commanded the 3rd brigade. Mandalay was speedily captured, and Upper Burma was annexed in 1886. There followed a long guerrilla war with bands of dacoits, aggravated by the frontier peoples attempting revenge against the Burmese. In defeating this guerrilla warfare and in pacifying Upper Burma, White, who commanded there from March 1886, played a leading part and established his reputation both as a general and as an administrator. He was made KCB in 1886, and promoted major-general in 1889.

In 1889 White was transferred from Burma to command at Quetta, where he faced the problems of the north-west frontier. The controversy between those wanting to make the Indus the administrative frontier and those wanting to extend it to the borders of Afghanistan was at its height; but the ‘forward’ school, supported by the commander-in-chief, Sir Frederick Roberts, and by the viceroy, Lord Lansdowne, was in the ascendant, and White, an enthusiastic supporter of Roberts’s views, became an instrument of that policy. In the autumn of 1889 he commanded the Zhob valley expedition. The operations, against a people which had long made their almost inaccessible mountain home a base for raids into British territory, were well planned and executed. White, having scaled the heights of the Maramazh, surrounded the principal village of the people, who surrendered. In the following years, with Sir Robert Groves Sandeman, he was occupied with the pacification of Baluchistan, one of the lasting achievements of the ‘forward’ policy. He showed considerable political and diplomatic skill, and worked harmoniously with his civilian colleagues: in 1893 he was made GCIE.

In 1893 White was chosen over seniors to be commander-in-chief in India. His term saw the greatest development of the ‘forward’ policy. Encouraged by his success in Baluchistan he supported the policy of opening up communications beyond the Indus and subjugating the unruly Pathan people. This policy brought about a succession of frontier campaigns. The gradual approach of Russia to the northern frontier of Afghanistan, and the threat of a Russian attack upon India, were then the principal military concern, and the chief argument of the advocates of the ‘forward’ policy was the necessity, in view of this menace, of obtaining better control of the peoples of the north-west frontier, and thereby exerting more influence in Afghanistan. White’s command began with a small expedition in 1894 against the Abor people on the north-eastern frontier. This was followed in 1895 by the more considerable Chitral campaign. The relief expedition which was so successful had more than local importance in view of Russian approaches to the Pamirs. The Chitral campaign was followed in 1897 by a succession of outbreaks along the frontier, which caused the expeditions into the Tochi and Swat valleys and against the Mohmands, and before these were ended the most warlike and important frontier peoples, the Afridis and Orakzais, rose and burnt the British forts in the Khyber Pass. There followed the Tirah campaign, the largest in India since the mutiny. While responsibility for the policy of these expeditions was with the viceroy, the earl of Elgin, who had followed the tradition established by Lansdowne, White was responsible for their planning and organization. All were successful in gaining their immediate objectives, but the permanent gains were small. White probably hoped that large-scale operations would finally solve the problem. In that he was not successful.

White implemented the abolition of the military presidency system, and continued Roberts’s policies of improving musketry, and encouraging temperance among British other ranks. He also improved mountain warfare training, particularly of the British troops. He was made GCB, and at the end of 1897 was appointed quartermaster-general at the War Office.

In September 1899, before the outbreak of the South African War, White was sent, aged sixty-four and inadequately briefed, to command in Natal, to defend it against invasion. His predecessor in command there, Sir William Penn Symons, had advanced to Dundee at the frontier, and though White wanted to concentrate his whole field army in the Ladysmith area, he allowed himself to be overruled by the dashing Symons, and the campaign in Natal began with the British forces divided. The British underestimated the invading Boers and the advantages of their mobility. After a successful action at Talana (20 October), in which Symons was killed, the exposed Dundee column retreated to Ladysmith. The next day the Boers were defeated by Major-General French at Elandslaagte, but by then the invasion had extended far into Natal. A disastrous night operation at Nicholson’s Nek ruined White’s plan for engaging the enemy at Lombard’s Kop (30 October), and his entire army was shut up in Ladysmith (2 November).

White could have retreated south across the Tugela, though this would have been risky and entailed abandoning much ammunition and stores, and might have harmed British morale. He claimed that by attracting the Boers to Ladysmith he preserved the rest of Natal from invasion.

Buller believed that White’s blunder in letting his field army be confined in Ladysmith wrecked the entire strategy of the war. White’s decision not to withdraw across the Tugela to join the main British force was, and continued to be, controversial. It rendered his field force immobilized and ineffective in Ladysmith, where it deteriorated and many died of typhoid. Moreover, he probably should at least have sent out his mounted troops-four regular cavalry regiments and five colonial regiments. Useless in the siege, they would have been valuable elsewhere: their horses ended as ‘chevril’, steaks and soup. His command was ineffective and uninspiring. Despondent and indecisive, he seldom left his headquarters, and was nicknamed ‘invisible White’. Despite the urging of Colonel Sir Henry Rawlinson and other officers, the defence was essentially unenterprising and passive-he only belatedly and reluctantly agreed to limited counter-attacks. However, he rejected Buller’s heliographed suggestion, on 16 December after Colenso, that he make terms with the Boers. After a siege of 118 days, Ladysmith was finally relieved on 28 February 1900 by Buller’s Natal field force. Addressing the garrison, White said, ‘Thank God we kept the flag flying’ (Pakenham, 366).

Roberts, whose protege and friend White had been, refused to employ him in any responsible position because of his strategic blunder. However, White’s health was broken as a result of the siege, and he was invalided back to England. Although to Roberts, Buller, and other officers White was discredited, to the British public he was ‘the hero of Ladysmith’. He was welcomed by large crowds and royal and civic honours.

From 1900 to 1904 White was governor of Gibraltar. In 1903 he defended his wartime decisions at the royal commission on the war in South Africa (the Elgin commission). Later in 1903 he was promoted field marshal. Although the king was advised that White ‘lacked great abilities, military or otherwise’ (Lee, 2.100), in 1905 he was awarded the Order of Merit. He was one of the most decorated officers in the army, and also had honorary degrees from Oxford, Cambridge, Edinburgh, and Dublin. From 1904 he was governor of the Royal Hospital, Chelsea. He made public speeches urging patriotism and military preparedness, though not any specific programme. In 1910 he suffered two heart attacks, and in 1911 aphasia. He died at the Royal Hospital on 24 June 1912 and was buried with his ancestors at Broughshane, co. Antrim.