Gibraltar Governor Gerald Lathbury (Sir Gerald William Lathbury) (1906-1978), army officer, was born in Murree, India, on 14 July 1906, the only child (a daughter born previously had died very young) of Colonel Henry Oscar Lathbury and his wife, Katherine Fanny Cobbett, granddaughter of William Cobbett. Lathbury was educated at Wellington College and the Royal Military College, Sandhurst (1924-5). He was commissioned on 2 February 1926 and gazetted to the Oxford and Buckinghamshire light infantry stationed in Germany. He was seconded to the Gold Coast regiment from 1928 to 1933. He rejoined his own regiment at Bordon and went to the Staff College, Camberley, in 1937-8. 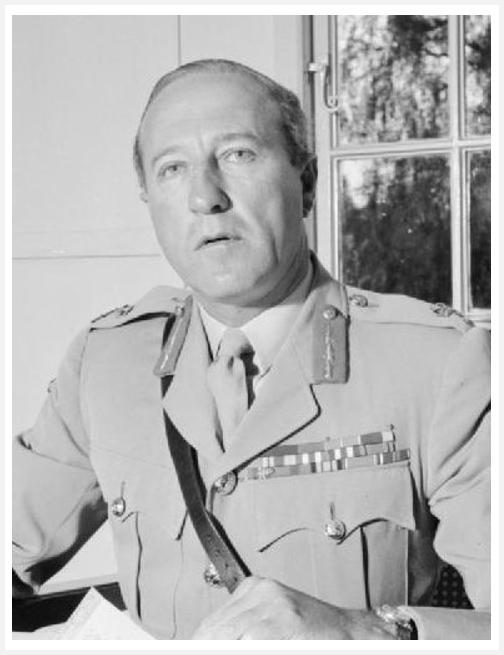 After the Second World War broke out Lathbury served in France, being appointed MBE in 1940. He then became general staff officer, grade 2 (GSO 2), at the Staff College and GSO 1 at the War Office. He was given command of the 3rd parachute battalion and soon selected to command the 3rd Parachute brigade and then the 1st Parachute brigade in North Africa, Sicily, and Italy where he was appointed to the DSO (1943). He commanded the 1st Parachute brigade in the Arnhem operation in 1944. In 1942 he married Jean Gordon, daughter of Lieutenant-Colonel Edward Gordon Thin, of Aston Somerville Hall, Broadway, Worcestershire; they had two daughters.

After attending the Imperial Defence College in 1948 Lathbury commanded the 16th airborne division (TA) as major-general that year. He was appointed CB in 1950. He became commandant of the Staff College in 1951, vice-adjutant-general in 1954, and commander-in-chief east Africa in 1955. This was at the height of the operations in Kenya to defeat the Mau Mau rebellion and on reaching Nairobi Lathbury pursued his task with enthusiasm. It was made easier by his liking Africans and taking pleasure in the spectacular Kenya countryside-he was an ardent naturalist, conservationist, and bird-watcher. Moreover, he was able to establish friendly relations with the white settlers at an awkward time for them, given the policies of the British government during Britain’s withdrawal from empire. He brought the operations to a successful conclusion and was appointed KCB (1956) for his work. Back home he was promoted lieutenant-general, and became director-general of military training in 1957. He was appointed general officer commander-in-chief, eastern command, in 1960 and promoted general. In 1961 he became quartermaster-general to the forces, a post he held until 1965 when he retired from the army.

Lathbury was governor of Gibraltar from August 1965 until April 1969. This covered a period when conditions there were becoming more difficult almost daily. Frontier restrictions were being intensified; Spanish propaganda was at its height; adverse resolutions were being passed in the United Nations; abortive and unpopular talks were held with the Spanish government; there was, until 1967, a virtual pay freeze. The people, firm and unyielding before these pressures, were none the less indignant, confused, and anxious. Throughout all these difficulties Gibraltar’s stately, elegant soldier-governor radiated a serene imperturbability. This quality was in his nature, but it exactly met the need of the moment, as it helped to counter the people’s anxiety and responded to and reinforced their resolve.

There were silver linings in those years as well: the fast-growing evidence of British political and moral support; the start of the development programmes; the gradual consolidation of popular feeling and pride in the community; the triumph of the referendum; and the new constitution, with its guarantees that the people would remain with Britain as long as this was their wish. In these matters, too, Lathbury remained apparently unmoved, but he deeply shared the Gibraltarians’ satisfactions as well as their trials and disappointments and worked hard to promote and further their interests.

Lathbury was colonel-commandant of 1st Royal Green Jackets and the Parachute regiment from 1961 to 1965, and was much involved in planning the amalgamation of the former with the King’s Royal Rifle Corps and the rifle brigade to form the Royal Green Jackets in 1966. He was also colonel of the West India regiment in 1959 and of the Jamaica regiment from 1962 to 1968. He was aide-de-camp-general to the queen from 1962 to 1965 and was appointed GCB in 1962.

Lathbury’s first marriage was dissolved in 1972 and he married in the same year Mairi Zoe, widow of Patrick Somerset Gibbs and daughter of Patrick Mitchell, rubber planter in Malaya, and stepdaughter of Arthur Macmillan, the brother of Harold Macmillan (later the earl of Stockton). Lathbury died on 16 May 1978 at his home in Mortimer, Berkshire. The funeral was held at Mortimer parish church, the bearers appropriately being found from the Royal Green Jackets and the Parachute regiment.