Gibraltar Governor James O’Hara, second Baron Tyrawley and Baron Kilmaine (1681/2-1773), army officer and diplomat, was the only son of Charles O’Hara, first Baron Tyrawley (d. 1724), and his wife, Frances (d. 1733), daughter of Gervase Rouse of Rous Lench, Worcestershire. O’Hara was commissioned on 15 March 1703 a lieutenant in his father’s regiment, the Royal Fusiliers, and a captain on 24 March 1705. He fought at the siege of Barcelona in 1706 and was wounded at Almanza in 1707, and again at Malplaquet in 1709, when he served as an aide-de-camp to Marlborough. He succeeded to the colonelcy of his father’s regiment on 29 January 1713 and then served with the regiment in Minorca until the end of the reign. O’Hara was named an aide-de-camp to George I in 1717 (continuing to hold office under George II until 1743), and in 1718-19 in the Mediterranean. His regiment was stationed in Ireland from 1719 to 1727. 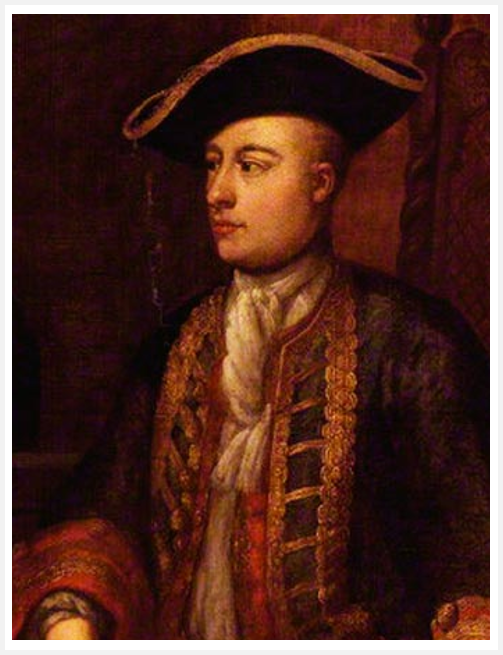 O’Hara was created Baron Kilmaine in the Irish peerage on 8 February 1722, and took his seat in the Irish House of Lords on 29 August 1723. He succeeded his father on 8 June 1724 and on 25 June was sworn of the Irish privy council. In November 1724 he married Mary (b. in or after 1696, d. 1769), daughter of William Stewart, second Viscount Mountjoy. They had no children, though Tyrawley’s extra-marital relationships produced several offspring. His attempt in 1727 to obtain the duke of Bridgewater’s interest in a parliamentary borough, presumably Brackley, ended in a polite rebuff. Debts in Ireland led him to seek a diplomatic posting and on 11 February 1728 he was named envoy-extraordinary to Portugal. His long stay there ensured a close relationship with King Joao V and it was reported that he ‘was almost naturalized amongst them, trusted and beloved there’ (Walpole, Corr., 22.48). He finally left Lisbon on 18 July 1741 and on his return was reported to have ‘brought three wives and fourteen children’ back with him (ibid., 18.104). His estates, too, were in better shape, aided by the £800 p.a. he gained after the death of his mother.

Meanwhile Tyrawley had become successively brigadier-general (1735), major-general (1739), and lieutenant-general (1743), as well as changing his regiment from the Royal Fusiliers to the 7th foot in 1739, the first of a rapid series of changes which finally saw him settle on his eighth regiment, the Coldstream Guards, in 1755. While in Dublin in 1741 he declined an American command, and he spent 1742-3 in England agitating for honours or employment before being appointed ambassador-extraordinary and -plenipotentiary to Russia on 17 December 1743. He left St Petersburg on 8 March 1745, and was available to serve under General George Wade during the forty-five.

In 1747, after approaching the duke of Newcastle, Tyrawley was named governor of Minorca, and at the end of the year, on 17 December, he was elected a fellow of the Royal Society. Unfortunately he was, as he put it, ‘interdicted’ from taking up his colonial post. This was still a grievance for Tyrawley in 1750, and no doubt explains his appointment in March 1752 as minister-plenipotentiary to Portugal, a post which he took up with alacrity in April before returning in July. Tyrawley was still an absentee governor when Minorca was besieged by the French. On 2 June 1756 he embarked from Portsmouth as the new governor of Gibraltar with orders to proceed via Gibraltar to pick up reinforcements with which to relieve Minorca, but it fell before his arrival.

Tyrawley spent his time at Gibraltar in strengthening the fortifications and complaining about the lack of supplies and his own under-employment. He was eventually allowed to return home on 16 April 1757. He presided over the court martial of Sir John Mordaunt on 14 December 1757. His conduct as governor of Gibraltar was the subject of a parliamentary attack by Lord George Sackville, particularly his expenditure on defensive fortifications. Tyrawley defended himself at the bar of the Commons on 13 April 1758 and virtually browbeat his accusers, so that he escaped censure. Tyrawley was also critical of the decision to make Charles Spencer, third duke of Marlborough, general of foot in 1758, though he received some recompense in 1759 when he was named governor of Portsmouth. Nor was Tyrawley averse to repaying Sackville, being outspoken in his criticism of Sackville’s conduct at the battle of Minden in 1759. Tyrawley was named general on 7 March 1761. He was appointed commander-in-chief in Portugal in February 1762, but came home somewhat disenchanted in July 1762 claiming that the Portuguese only wanted British subsidies. He was sworn of the privy council on 17 November 1762, and made field marshal on 10 June 1763.

Tyrawley was offered the governorship of Minorca in 1766 in exchange for Portsmouth, Sackville remarking that ‘his Lordship not being an accommodating genius, refused the change, though for his advantage’ (Stopford-Sackville MSS, 1.110). This confirms Walpole’s sketch of Tyrawley: ‘he had a great deal of humour and occasional good breeding, but not to the prejudice of his natural temper, which was imperiously blunt, haughty and contemptuous, with an undaunted portion of spirit’ (Walpole, Memoirs of George II, 3.14). Tyrawley’s wife died on 5 February 1769, and Tyrawley himself was clearly ailing when he sent a message to Hester Pitt, countess of Chatham, which referred to his being ‘so blind as to be forced to employ another hand to write, so deaf as not to hear half the nonsense said near him, and so simple of understanding, as not to be able to conceal his own’ (Correspondence of William Pitt, 4.208).

Tyrawley died on 14 July 1773 at Twickenham, aged ninety-one. He was buried on 24 July at the chapel of Chelsea Hospital, where he was governor. His will referred to money owed him by Sir Arthur Gore, bt, for the purchase of lands in co. Mayo and co. Sligo. He left his estate to his two ‘natural’ daughters, Anne and Jemima, ‘both now living with me’, and appointed as executors his son Charles O’Hara and James Meyricke of Westminster. At least two other natural sons, Francis and James, predeceased him; another illegitimate daughter, apparently, was the actress George Anne Bellamy (1731?-1788).