Gibraltar Governor John Adye (Sir John Miller Adye), (1819-1900), army officer, was born at Sevenoaks, Kent, on 1 November 1819, the son of Major James Pattison Adye, Royal Artillery, and Jane, daughter of J. Mortimer Kelson of Sevenoaks. His grandfather Major Stephen Payne Adye, Royal Artillery, had three sons in the regiment. John Adye entered the Royal Military Academy, Woolwich, in February 1834. He passed out at the head of his batch, and was commissioned second lieutenant in the Royal Artillery on 13 December 1836. Serving successively in Malta, Ireland, and England, he was promoted first lieutenant in July 1839, second captain in July 1846, and captain in April 1852. He commanded the artillery at the Tower of London during the 1848 Chartist threat. 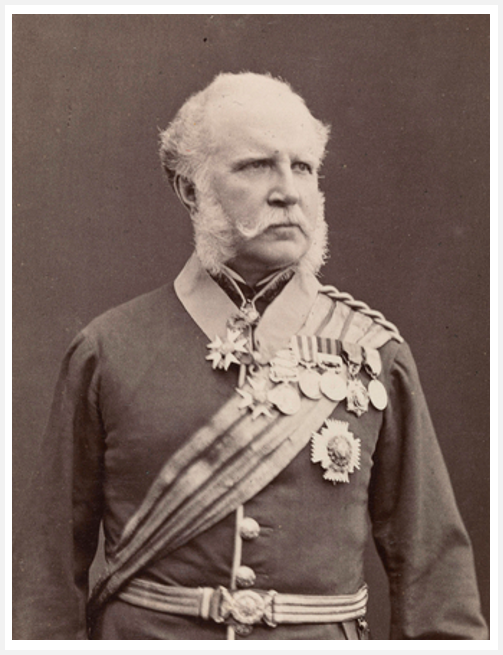 In May 1854, on the outbreak of the Crimean War, Adye went to Turkey as brigade major of artillery. He was made a brevet major on 22 September, and became assistant adjutant-general of artillery. He was present with the headquarter staff at Alma, Balaklava, and Inkerman, and served throughout the siege of Sevastopol, remaining in the Crimea until June 1856. He was mentioned in dispatches, and made brevet lieutenant-colonel on 12 December 1854 and CB on 5 July 1855. He received the Mejidiye (fourth class) and the Legion d’honneur (third class). Adye married in 1856 Mary Cordelia, daughter of Admiral Sir Montague Stopford. They had several children; their eldest son, John, became a Royal Artillery colonel.

In July 1857, during the Indian mutiny, Adye was sent to India as assistant adjutant-general of artillery. He arrived at Cawnpore on 21 November to find that Sir Colin Campbell had already left for the relief of Lucknow, and that the Gwalior contingent was advancing upon Cawnpore. He took part in the actions fought there by Major-General Charles Ash Windham on the 26th and following days, and afterwards wrote The Defence of Cawnpore (1858). He was present at the battle of 6 December, in which the Gwalior contingent was routed by Sir Colin Campbell after his return from Lucknow. His administrative duties then compelled Adye to return to Calcutta, and he saw no more fighting during the mutiny. He was mentioned in dispatches, and became regimental lieutenant-colonel on 29 August 1857 and brevet colonel on 19 May 1860.

From May 1859 Adye commanded the artillery in the Madras presidency. He was deputy adjutant-general of artillery in India from March 1863 until 1868, and implemented the amalgamation of the three East India Company regiments of artillery with the Royal Artillery, which required patience and tact. In November 1863 he joined the commander-in-chief, Sir Hugh Rose, at Lahore, and was sent by him to the Ambela valley, where the progress of General Chamberlain’s expedition against the Sitana fanatics was blocked. Adye, accompanied by Major F. S. Roberts, was to report on the situation. He was present at the action of 15 December which finally dispersed the Sitana warriors, and at the burning of Mulka a week later. He was mentioned in dispatches.

After nine years of Indian service Adye returned to England. He had formed strong views, which he frequently expressed, on the importance of trusting the people of India and admitting them to high office, civil and military. He believed in a frontier policy of conciliation and subsidies. He became regimental colonel on 6 July 1867.

On 1 April 1870 Adye was appointed director of artillery and stores, and has been blamed for the failure of the British artillery to match foreign artillery improvements. He believed in wrought-iron muzzle-loaders and succeeded in retaining them while he held office. However, he supported Cardwell’s reforms, and when they were criticized by John Holms, Liberal MP for Hackney, Adye replied in a pamphlet, The British Army in 1875 (1876).

In autumn 1872, with Colonel Charles George Gordon, Adye reported on the British cemeteries in the Crimea. He was made KCB on 24 May 1873, and promoted major-general on 17 November 1875 and lieutenant-general in 1879.

On 1 August 1875 Adye became governor of the Royal Military Academy, Woolwich. He participated in the public controversy over Russian expansion towards India and British relations with Afghanistan. He minimized the Russian threat, and advocated the conciliation of Afghanistan while opposing frontier changes. He replied (in October 1878) to Sir James Fitzjames Stephen’s letters in The Times in support of the forward policy, and in December printed for private circulation a pamphlet entitled England, Russia, and Afghanistan.

When Gladstone returned to office in 1880, Adye was appointed (1 June) surveyor-general of the ordnance. Gladstone wrote of the military members of the Commons that Adye was ‘better than any now there’ (Gladstone, 9.549). Nevertheless Adye failed to find a seat in parliament. In August 1882 he accompanied Wolseley to Egypt as chief of the staff, with the temporary rank of general, and contributed to the success of the campaign. He was mentioned in dispatches (London Gazette, 8 Sept and 6 Oct 1882), and received the thanks of parliament, the GCB, and the grand cross of the Mejidiye.

Adye returned to the War Office in October 1882, but left at the end of the year to become governor of Gibraltar. There he tried to reconcile the dual interests of a fortress and a commercial city, relaxed some of the military restrictions on trade, and provided recreation rooms for the garrison. He remained there nearly four years, and retired on 1 November 1886. He published at various dates several pamphlets and books, including Recollections of a Military Life (1895), which contained autobiographical reminiscences illustrated by his own sketches, Adye being an excellent artist. He became general on 20 November 1884, and a colonel-commandant in the Royal Artillery on 4 November 1881. He was also honorary colonel, from 6 May 1870, of the 3rd Kent artillery volunteers and the 3rd volunteer battalion, Royal West Kent regiment. Adye died on 26 August 1900 at Cragside, Rothbury, Northumberland, while on a visit to his son-in-law, Lord Armstrong.