Gibraltar Governor John Pitt, second Earl of Chatham (1756-1835), army officer, was born on 9 October 1756 at Hayes, Kent, the eldest son of the politician William Pitt the elder, first earl of Chatham (1708-1778), and his wife, Hester, nee Grenville (1720-1803), the daughter of Richard Grenville of Wotton Hall, Buckinghamshire, and the sister of Richard, Earl Temple. He was the elder brother of William Pitt the younger (1759-1806). Pitt joined the army as an ensign in the 47th foot on 14 March 1774, but resigned his commission in 1776 because his father opposed the American war; he resumed his military career as a lieutenant in the 39th foot (June 1778) when France entered the war. Promoted captain in the 86th foot in September 1779, he served at the siege of Gibraltar in 1779-83. On 10 July 1783 he married Mary Elizabeth Townshend (1762-1821), the second surviving daughter of Thomas Townshend, first Viscount Sydney; they had no children. 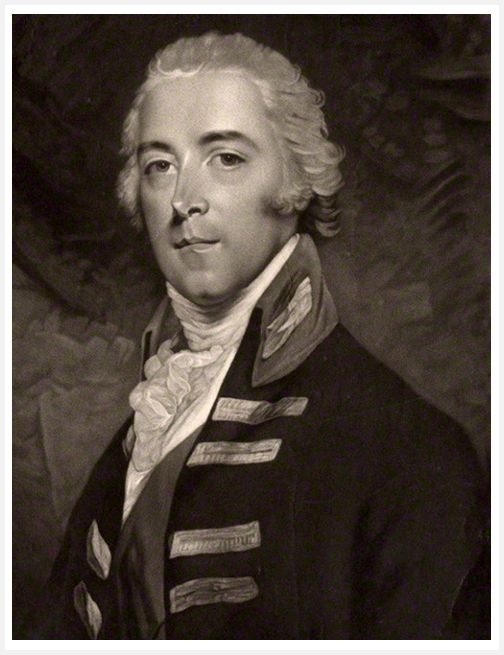 At the invitation of his brother, then prime minister, Chatham, who had succeeded to the earldom on the death of his father on 11 May 1778, became first lord of the Admiralty on 16 July. On 3 April 1789 he was sworn of the Privy Council, and on 15 December 1790 he was created KG. He retired from the Admiralty on 20 December 1794 but remained in the cabinet as lord privy seal. On 21 September 1796 he became president of the council instead. He resigned with his brother in July 1801.

Chatham’s military career continued in tandem. He was promoted colonel in 1793 and major-general in 1795, and appointed colonel of the 4th foot in 1799. In that year he commanded a brigade in the Netherlands under the duke of York. He was present at the second battle of Bergen on 2 October, coming to the aid of the hard-pressed General Coote, and was reported wounded at Beverwyk on 6 October. After returning home he became master-general of the ordnance on 27 June 1801, a post which he held until 8 February 1806, and again from 31 March 1807 to 7 March 1810. He became lieutenant-general in 1802, governor of Plymouth on 30 March 1805, and governor of Jersey on 22 September.

Although distant in manner, Chatham was a favourite of George III. He owed many of his appointments to this friendship and indeed, because of it, George Canning was at one point in April 1809 ready to see Chatham replace the duke of Portland as prime minister. Although Chatham’s military ambitions had suffered in 1808 when the command of the British army in the Peninsula was given to Sir Arthur Wellesley, in June 1809 he was compensated with the command of the Walcheren expedition. Its object was to take advantage of Napoleon’s embroilment with Austria by destroying the French fleet and arsenals along the Scheldt and seizing Antwerp and Flushing. Chatham commanded nearly 40,000 troops. The naval commander, Sir Richard Strachan, had thirty-five ships of the line and many smaller vessels. On 29 July part of the army landed at Walcheren and captured Middleburg. Other detachments took fortresses at the mouth of the Scheldt. Flushing fell on 16 August, but the chance of an early capture of Antwerp was not taken. The city was heavily reinforced and fortified. Chatham suspended operations in September, left 15,000 men on Walcheren, and took the rest home. However, half the men left behind soon succumbed to ‘Walcheren fever’. Thereupon orders were sent from London to destroy Flushing and abandon Walcheren.

Chatham has been blamed for the operation’s failure, but he was set an impossible task, for the medical establishment and resources were totally inadequate. Fortescue wrote of the expedition: ‘It was dogged not merely by misfortune, but by cruel, and it may be said undeserved, adversity’ (Fortescue, Brit. army, 7.96). Differences between the war minister, Castlereagh, and the foreign secretary, Canning, also contributed to the failure. Nevertheless, Chatham’s natural laziness and mediocre military talents did not help. On his return he presented a partisan report to the king in private, instead of forwarding it to Castlereagh, the secretary of state. An inquiry into his conduct compromised his reputation, and in March 1810 he resigned as master-general of the ordnance. Relations between Chatham and Strachan had been strained during the campaign; each blamed the other for unpunctual action and delays, hence the epigram:

Strachan’s friends called him ‘the late’ Lord Chatham. Chatham was nevertheless promoted general on 1 January 1812. On the death of the duke of Kent in 1820 he became governor of Gibraltar, which post he held until his death.

Physically, Chatham strongly resembled his father. Despite an aloofness and an undesirable indolence, he was an able administrator, being ‘clear-headed and possessed [of] excellent judgement … At the Office of Ordnance his administration brought the British Artillery up to a pitch of excellence unknown in his day’ (Fortescue, Brit. army, 7.55). He died on 24 September 1835 at 10 Charles Street, Berkeley Square, London, and was buried on 3 October in Westminster Abbey. At his death the peerage and its pensions became extinct.