Gibraltar Governor Joseph Sabine (1661-1739), army officer, came from a family of English settlers in Ireland. He was the second of the six sons (five of whom appear to have served with the army under William III) of Joseph Sabine, a landowner of Kilmolin, co. Wicklow, who married an English heiress by the name of Rawlins. On 8 March 1689 he was appointed lieutenant in Colonel Sir Henry Ingoldsby’s regiment, raised that year for William’s campaign in Ireland, and he was made captain of the grenadier company before 18 October 1689. Owing to losses the regiment was disbanded on 9 January 1690. On 13 July 1691 Sabine was made major in the late Colonel Charles Herbert’s regiment of foot (later the Royal Welch Fusiliers, 23rd foot). The 23rd returned from Ireland to England in 1692 and did not see active service in Flanders until 1694. Sabine was promoted lieutenant-colonel on 6 July 1695, during which year the regiment played a prominent part in the siege of Namur, suffering heavy losses in the successful attack on the French counterscarp on the night of 17 July. 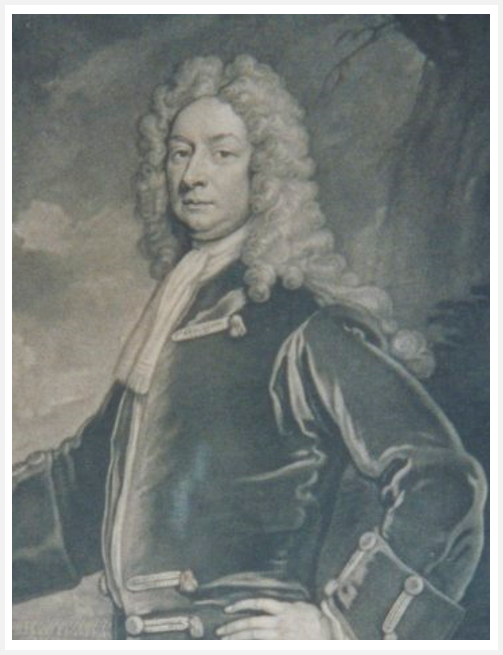 After the treaty of Ryswick (1697) the regiment was stationed in Ireland until the renewal of war, when the 23rd, under the command of Brigadier-General Ingoldsby, left from Carrickfergus on 1 July 1701. On 5 April 1700 Sabine married Hester, the daughter of Henry Whitfield, of Bishop’s Stortford, Hertfordshire, in the church of St Peter and St Kevin, Dublin. They had three sons, all of whom died young. Sabine served with his regiment in Flanders throughout the War of the Spanish Succession, and was made brevet colonel in 1703. He was wounded in the attack upon the heights of Schellenberg on 2 July 1704, yet commanded the regiment at the following battle of Blenheim, on 13 August 1704. On 1 April 1705, following Ingoldsby’s transfer to the colonelcy of the 18th Royal Irish regiment, Sabine was made full colonel of the regiment, which he commanded at Ramillies (1706). He was promoted brigadier-general on 1 January 1707 and in 1708 commanded the force of ten regiments which sailed from Ostend to Tynemouth to thwart the Pretender’s plans to land on the Northumberland coast. Upon his return to Flanders, Sabine distinguished himself greatly in that year’s campaign: first on 30 June, at the battle of Oudenarde, where at the head of his brigade he captured or destroyed seven Swiss battalions in the attack on the village of Heynem; and later at the siege of Lille, where on 27 August he commanded a force of 2000 men drawn from English regiments which suffered heavy losses in gaining a lodgement on the French counterscarp. Further assaults in early September caused the town to capitulate, and the citadel fell on 28 November.

On 17 March 1710 Sabine married Margaretta (1683-1750), the youngest daughter of Charles Newsham, of Chadshunt, Warwickshire; they had at least nine children, including twin daughters born in 1716.

On 1 January 1710 Sabine was made major-general and in July 1712 he was appointed to command the citadel of Ghent. During this time he was instrumental in crushing a mutiny which broke out among the garrison. On 9 July he received information which led him to send for Brigadier Sutton’s dragoons, who together with loyal troops crushed the mutiny. Seven ringleaders were put to death after full evidence and the garrison was marched round the dead bodies. A general pardon was then read at the head of each regiment. Sabine remained at Ghent until some months after the treaty of Utrecht in 1713. The magistrates of the town presented him with a silver basin and ewer in recognition of his office. His commission as major-general was renewed by George I in 1714 and his regiment, now reduced and renamed the Prince of Wales’s Own Royal Welch Fusiliers, was stationed in Ireland. During the Jacobite rising in 1715 they were sent to Chester to relieve forces sent north, and thereafter were garrisoned at Hereford.

Sabine joined the duke of Argyll’s staff as major-general at Stirling in early January 1716 and commanded a brigade of four regiments in the march towards the Pretender’s army at Perth. The Jacobite forces withdrew and in the ensuing chase Sabine was ordered on 2 February, with three battalions of foot and supporting dragoons, to Aberbrothwick, and later, on 8 February, to Peterhead, in an attempt to intercept the retreating Jacobite cavalry. In the aftermath of the rising, following the return to London in April 1716 of the British commander-in-chief, Cadogan, Sabine was left in command of the army in Scotland. In July 1717 the duke of Atholl complained of ‘the conduct of General Sabine and other officers in regard to rebel prisoners … and of the plundering and other impositions made by the troops’ (Atholl MSS, 71). In 1719 Sabine was made governor of Berwick Castle.

In 1722, with Brigadier-General Thomas Stanwix, Sabine was appointed to examine the reduced officers and out-patients of Chelsea Hospital. In 1723, as honorary colonel, he carried out the annual review of his regiment at Inverness on its way to take up garrison duty at Fort William. His nephew Lieutenant-Colonel Newsham Peers, acting colonel of the regiment, succeeded to the full colonelcy upon Sabine’s death.

In addition to the family’s estate in Kilcullen, co. Kildare, in 1715 Sabine purchased the house and estate of Tewin in Hertfordshire. In the following year, at a cost of £40,000, he ‘rebuilt the House and all the offices, in magnificent manner, and improved the gardens’ (Salmon, 59); it was twice visited by George II.

From 1727 to 1734 Sabine was MP in the government interest for Berwick, where he also remained governor until 1730. In March 1727 he was made lieutenant-general and in July 1730 was promoted full general. During 1730 he was sent to Gibraltar as governor, and he died there on 24 October 1739, aged seventy-eight. His remains were buried at Tewin church, where a memorial stands to his name. He was survived by seven of his children; among his descendants were the natural historian Joseph Sabine and the army officer and physicist Sir Edward Sabine.