Gibraltar Governor Kenneth Anderson (Sir Kenneth Arthur Noel Anderson), (1891-1959), army officer, was born at Dhazwar, Madras, on 25 December 1891, the only son of Sir Arthur Robert Anderson (1860-1924), a Scottish railway engineer, and his wife, Gertrude, daughter of J. D. Fraser of Tiverton. He was educated at Charterhouse School (c.1904-1910) and the Royal Military College, Sandhurst. In 1911 he was commissioned second lieutenant in the Seaforth Highlanders. He joined the 1st battalion in India, went with it to France in 1914, and served on the western front. Anderson was promoted captain in 1915, and at the end of the year was appointed adjutant of the 23rd Northumberland Fusiliers (Tyneside Scottish). On 1 July 1916, the first day of the Somme, he was seriously wounded; he was awarded the MC. It was nearly a year and a half before he was fit enough to rejoin his regiment, then in Palestine, where he served in Allenby’s campaign in Palestine. He married on 12 February 1918 Kathleen Lorna Mary, daughter of Sir Reginald Gamble, comptroller and auditor-general in India; they had a son and a daughter, and his wife survived him. 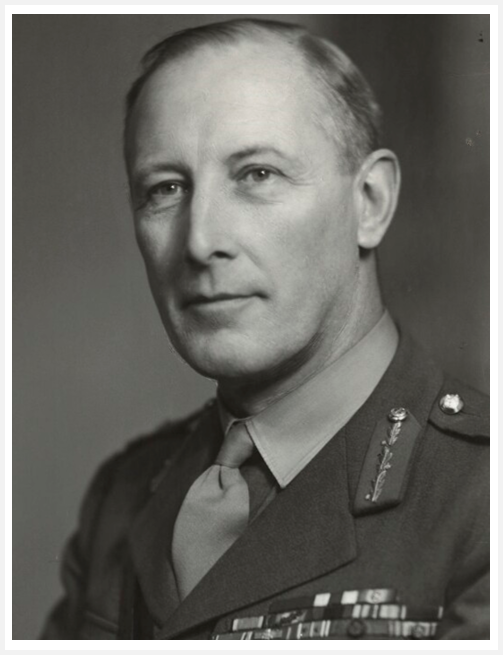 Anderson was promoted major in 1923, and entered the Staff College in 1926 (graduated 1928). In 1930 he commanded the 2nd Seaforths in operations on the north-west frontier (mentioned in dispatches); he then commanded the troops in Palestine (1930-32). He was promoted lieutenant-colonel in 1930 and colonel in 1934. From 1938 to 1940 he commanded the 11th infantry brigade, a period which included the retreat to Dunkirk. In the final stages of the evacuation he took over command of the 3rd division from General B. L. Montgomery (later Viscount Montgomery).

After promotion to major-general in 1940 Anderson spent two years in the home forces, commanding in succession the 1st division, 8th corps, 2nd corps, and the eastern command.

In the autumn of 1942 Anderson commanded the eastern task force which was being prepared for the allied landings (Operation Torch) in French north Africa. Under Eisenhower’s command these took place successfully on 8 November 1942, and three days later Anderson took command of the British First Army, which consisted at first of only four brigades, and of the 2nd United States corps; the 19th French corps came under his orders a little later. His mission was to dash eastwards from Algiers as rapidly as possible to secure Tunis over 500 miles away. As there had been no assault landing east of Algiers, it was doubtful from the first that Tunis could be reached before it had been reinforced by the Germans. French co-operation was not at first forthcoming, the American troops were inexperienced, communications through the mountainous country were sparse, and there was a shortage of motor transport and aircraft. Another handicap was Eisenhower’s lack of experience in the field and his preoccupation with political rather than military matters. By 28 November Anderson reached a point only 12 miles short of Tunis, having overcome slight German resistance, which he first encountered near Bone. He undertook an assault on 22 December, but was held up by torrential rain. The attack then had to be postponed until the spring, since it had become clear that much larger forces would be required and a more deliberate operation planned. Strong German forces were pouring into Tunisia by sea and air as well as by land from Rommel’s army as it withdrew before Montgomery’s victorious advance from Alamein.

The winter was spent in reorganizing and reinforcing the allied forces and in repelling German counter-attacks, the most serious of which penetrated the line at the Kasserine Pass in February 1943. Allied intelligence misjudgement, due to difficulties in interpreting available ULTRA intelligence, had led to Anderson’s deploying the main allied reserves further north, leaving a weak, mostly American, force to guard the pass. Rommel’s force smashed through the pass, inflicting heavy casualties on the Americans, but later withdrew. In February, too, the Eighteenth Army group headquarters was set up under General Sir Harold Alexander (later Earl Alexander) to co-ordinate the operations of all the ground forces. He moved round powerful reinforcements from the Eighth Army and resumed the offensive at the end of March. After some clearing-up operations the final attack was launched on 6 May.

Pressure was applied along the whole front of the axis, now about 130 miles in length. Then a concentrated attack was made under Anderson’s command, up the Mejerda valley direct on Tunis, supported by intense bombing and by the fire of over a thousand guns. Two infantry divisions broke through on a frontage of 3000 yards. These were followed by two armoured divisions which occupied Tunis on the following day. A quarter of a million men (125,000 Germans) surrendered unconditionally. The allied casualties were fewer than 2000 men.

After Tunis, Anderson commanded the Second Army, which was preparing for the landing in Normandy (June 1943 to January 1944), but soon after Montgomery’s arrival to command the Twenty First Army group for the invasion, Anderson was transferred to the eastern command and replaced by General Miles Dempsey, a sad disappointment for Anderson. His last military appointment was as general officer commanding-in-chief, east Africa (January 1945 to October 1946). He was appointed CB in 1940, KCB in 1943, and promoted general in 1949. He also received US, French, Moroccan, Tunisian, and Ethiopian honours.

From 1947 to 1952 Anderson was governor of Gibraltar, and oversaw improvements in housing conditions and the introduction of constitutional and administrative reforms, including the establishment of a legislative council.

Anderson was a courageous, competent, energetic commander, with a high sense of duty and much common sense. He could be forceful and frank, almost rude, in argument, but his shy, reserved manner made him difficult to know well and he lacked those characteristics which catch the public eye. His later years were saddened by illness and personal tragedy. His only son, Michael Ian (b. March 1927), was killed in action serving with the Seaforth Highlanders in Malaya on 12 November 1949 and his daughter died a few years later. Anderson died at King George V Hospital, Gibraltar, on 29 April 1959.