Gibraltar Governor Leicester Smyth [formerly Curzon-Howe], Sir Leicester (1829-1891), army officer, born on 25 October 1829, was the seventh son of Richard William Penn Curzon, afterwards Curzon-Howe, first Earl Howe, and his first wife, Lady Harriet Brudenell, daughter of Robert Brudenell, sixth earl of Cardigan. After education at Eton College, he was commissioned second lieutenant in the rifle brigade on 29 November 1845. He joined the reserve battalion at Quebec in 1846, became lieutenant on 12 November 1847, returned to England, and went with the 1st battalion to the Cape in January 1852. He served in the 1852 Basuto War, and distinguished himself in the action at Berea on 20 December. He commanded one of two companies which climbed almost inaccessible heights under fire, and drove a large force of Sotho before them. He was highly praised in dispatches. 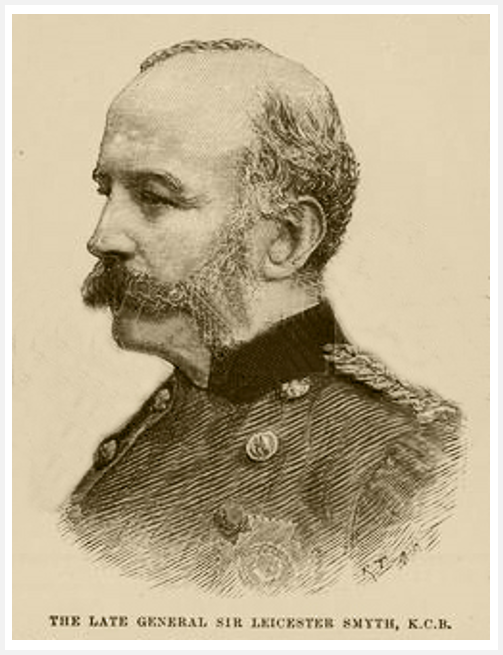 On 23 February 1854 Curzon-Howe was appointed aide-de-camp to Lord Raglan, accompanied him to Turkey and the Crimea, and was present at Alma and Inkerman, and throughout the siege of Sevastopol. He was assistant military secretary from 7 October 1854 to 11 November 1855, first under Lord Raglan and afterwards under General Simpson. He became captain in his corps on 22 December 1854, and was made brevet major on 17 July 1855 and brevet lieutenant-colonel from 8 September, having taken home the dispatches announcing the fall of Sevastopol. He continued to serve in the Crimea as aide-de-camp to General Codrington until 30 June 1856. He received the Legion d’honneur (fifth class) and the Mejidiye (fifth class).

Curzon-Howe was assistant military secretary in the Ionian Islands from 23 November 1856 to 23 August 1861. He then rejoined the 1st battalion of the rifle brigade, in which he had become major on 30 April, and served with it at Malta and Gibraltar until 4 August 1865, when he went on half pay. He had become colonel in the army on 9 February 1861. On 12 February 1866 he married Alicia Maria (d. 1898), eldest daughter and heir of Robert Smyth JP, of Drumcree, co. Westmeath, and in the following November he took the surname of Smyth. They had no children. He was made CB on 13 May 1867. He was military secretary at headquarters in Ireland from 1 July 1865 to 30 June 1870, and deputy quartermaster-general there from 17 July 1872 to 26 February 1874.