Gibraltar Governor Lothian Nicholson (Sir Lothian Nicholson) (1827-1893), army officer, third son of George Thomas Nicholson of Waverley Abbey, near Farnham, Surrey, and Anne Elizabeth, daughter of William Smith, MP for Norwich, was born at Ham Common, Surrey, on 19 January 1827. He was educated at Mr Malleson’s school at Hove, and in 1844 entered the Royal Military Academy, Woolwich. On 6 August 1846 he was commissioned second lieutenant, Royal Engineers (first lieutenant on 26 January 1847). After the usual Chatham course he was sent, in January 1849, to North America, and spent two years between Halifax, Nova Scotia, and New Brunswick. On his return to England he was stationed at Portsmouth, and on 1 April 1855 was promoted second captain. In July he was sent to the Crimea. He served in the trenches during the last month of the siege of Sevastopol, in command of the 4th company, Royal Engineers, which he also commanded in the expedition to Kinburn. He helped demolish the Sevastopol docks, was mentioned in dispatches, received the Mejidiye (5th class), and was promoted brevet major on 2 November 1855. 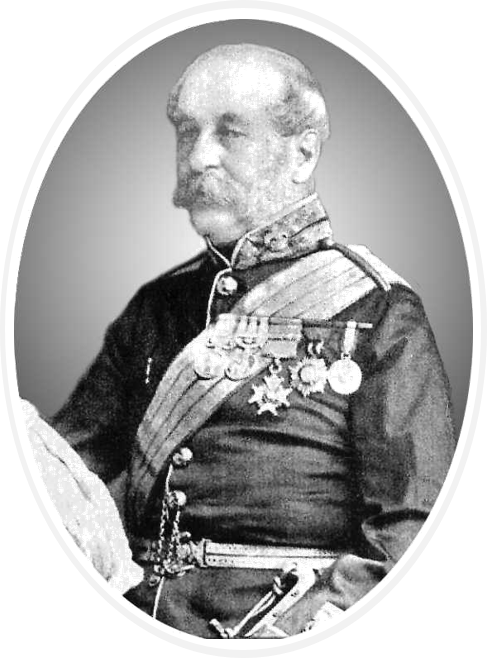 Nicholson returned home in June 1856 and was stationed at Aldershot, where he was employed in laying out the new camp. On 6 October 1857 he embarked with the 4th company, Royal Engineers, for Calcutta to take part in the suppression of the Indian mutiny. On arrival in India he joined Lord Clyde and served for some time on his staff. He repaired the suspension bridge over the Kali Nadi, on the road to Fatehgarh, and so enabled a rapid march to be made to Fatehgarh and many stores and other government property to be secured. He was at the action of the Alambagh and at the siege and final capture of Lucknow, when he commanded the Royal Engineers on the left bank of the river and constructed the bridges over the Gumti. Nicholson remained at Lucknow as chief engineer to Sir Hope Grant. He served in the operations in Oudh, was at the action of Bari, and took an active part in the subjugation of the terai. He was superintending the construction of bridges and roads when, while out shooting, his gun exploded and he permanently injured his hand. Mentioned in dispatches, for his services he was promoted brevet lieutenant-colonel on 20 July 1858. He was made a CB in May 1859 and given the distinguished service reward.

After leaving Jersey in 1883 he was unemployed until 8 July 1886, when he was appointed inspector-general of fortifications and of Royal Engineers in succession to Lieutenant-General Sir Andrew Clarke. During the time Nicholson held this important office the defence of the coaling stations abroad was in progress, and he initiated the works for revising and improving the defences of the United Kingdom under the Imperial Defence Act and for the reconstruction of barracks under the Barracks Act. In June 1887 he was made a KCB, and was colonel-commandant, Royal Engineers, from June 1890 until his death.

Nicholson married in London, on 21 November 1864, Mary (1841-1921), daughter of John Romilly, first Baron Romilly. They had seven sons and three daughters, who, with their mother, survived him. With a good constitution and energetic, Nicholson enjoyed an active life and delighted in field sports. With an intense esprit de corps he combined a wide sympathy with the other branches of the army and supported many philanthropic efforts. He contributed several papers to The Professional Papers of the Corps of Royal Engineers.

On 26 March 1891 Nicholson was appointed governor and commander-in-chief of Gibraltar. He died there on 27 June 1893, after a short attack of fever, and was buried in the cemetery at Gibraltar.