Gibraltar Governor Noel MacFarlane (Sir Noel Mason MacFarlane -Frank), (1889-1953), army officer, was born on 23 October 1889 in Maidenhead, the eldest son of Dr David James Mason (1862-1930), a Scot who later added his mother’s name, MacFarlane, and his wife, Mary Blanche Anstey (d. 1947). He was educated at Cordwalles School, Maidenhead (1896-1902), Rugby School (1902-7), and the Royal Military Academy, Woolwich (1907-9), and was posted to the Royal Artillery in 1909. War service in France, Belgium, and Mesopotamia gained him a Military Cross with two bars, two mentions in dispatches, and a Croix de Guerre. On 14 September 1918 he married Islay (1895/6-1947), daughter of Frederick Islay Pitman, stockbroker. They had a son and a daughter, though Mrs Mason-MacFarlane disliked her husband’s nomadic lifestyle. He took part in the Third Anglo-Afghan War of 1919-20, and in 1920 went to the Staff College at Quetta. 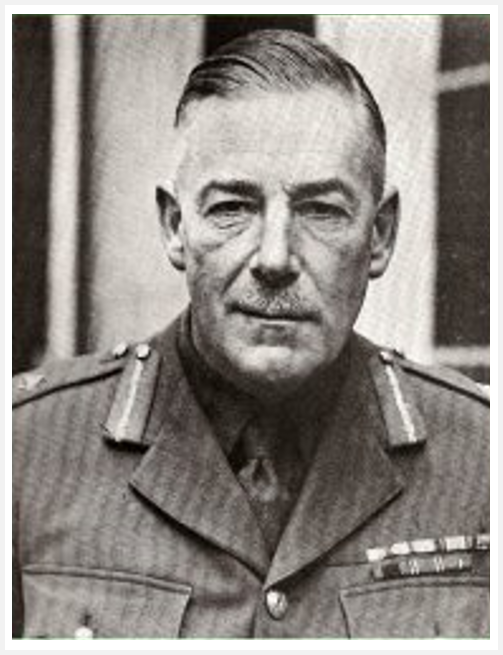 In 1931 Mason-Mac, as he was commonly known, became military attache in Vienna, with additional responsibility for Budapest and Bern. His work was commended by the British minister in Vienna, Walford Selby. Mason-MacFarlane graduated from the Imperial Defence College in 1935, and two years later secured the crucial posting to Berlin working under the ambassador, Sir Nevile Henderson.

Although Henderson liked Mason-MacFarlane, the military attache thought the ambassador did not take a tough enough line with the Nazis. In his leisure hours Mason-MacFarlane took to writing uncomplimentary verse about his ‘celibate and caustic chief’ (Mason-MacFarlane MSS, 27 Aug 1938, IWM, MM 28). He was present when German troops entered Vienna in March 1938 at the time of the Anschluss, and Henderson sent him on a dangerous mission to the Prague embassy in September after the Godesberg meeting between Hitler and Chamberlain. This was to deliver a map outlining Germany’s demands in the Sudetenland.

As a result of his trip through Czech defence lines, Mason-MacFarlane formed the impression that Czech army morale was poor (he had great expertise about the German army, but his opinion was not shared by the British military attache in Prague). Mason-MacFarlane repeated this opinion on a visit to London on 27 September, eliciting a sharp response from the permanent under-secretary at the Foreign Office, Cadogan, who wrote in his diary ‘What does he know about it?’ (The Diaries of Sir Alexander Cadogan, ed. D. Dilks, 1971, 107). Foreign Office officials, in contrast with those at the War Office who trusted Mason-Mac’s judgement, found him excitable and an advocate of hair-brained schemes. His biographer cites the occasion when Mason-MacFarlane told him in 1938 that he was thinking of shooting Hitler from his house on the Charlottenburger Chaussee in Berlin. He could, he claimed, ‘pick the bastard off from here as easy as winking’ (Butler, 75). The plan came to nothing, but no one doubted that Mason-MacFarlane had the nerve to carry it out, even if his superiors disapproved. Life in Nazi Germany became increasingly distasteful for Mason-MacFarlane, and he was relieved when, in the summer of 1939, he was posted back to Aldershot as brigadier in command in the Royal Artillery.

As director of military intelligence, with the rank of major-general, with the British expeditionary force in France in 1939, Mason-MacFarlane had knowledge of Germany and the German army which was invaluable. When the Germans broke the French Ninth Army front he improvised and commanded a scratch force to protect the British right and immediate rear. ‘MacForce’ was behind the French First Army, whose front never actually broke, was afterwards withdrawn to prepare the defence of Kassel, and was then disbanded. Mason-MacFarlane and other key officers were ordered back to Britain. For his work in France he was appointed DSO.

In June 1940 Mason-MacFarlane was sent as deputy governor to Gibraltar where his energy, character, and leadership, in extremely difficult circumstances, performed miracles in reorganizing the defences and maintaining morale. After a brief interlude commanding a division in Kent, Mason-MacFarlane was sent to Moscow in 1941 as head of the British military mission, with the task of maximizing the effectiveness of allied aid to Russia. Once more he came up against authority by criticizing over-optimistic promises and opposing aid without conditions. In June 1942 he returned to Gibraltar, this time as governor and commander-in-chief. He now had the invidious task of continuing preparations for defence, and maintaining morale while the risks of attack decreased. He accommodated General Eisenhower’s headquarters for the invasion of north Africa and gave valuable support to these operations. In 1943 he was promoted KCB; he had been appointed CB in 1939.

Italy surrendered on 3 September 1943 and Mason-MacFarlane was asked to head a military mission to Brindisi on 13 September. Then, and subsequently as head of the Allied Control Commission, Mason-MacFarlane’s task was to make a former enemy into an ally. He preferred Bonomi to Marshal Badoglio as a head of government, but this did not accord with the Whitehall view. Churchill thought Mason-MacFarlane had been weak in his new role, and Harold MacMillan wrote later that Mason-MacFarlane had made ‘a complete mess’ of the Italian situation. MacMillan found him ‘frightfully temperamental and a regular prima donna’ (H. MacMillan, War Diaries: Politics and War in the Mediterranean, 1984, 466, 428). He also judged Mason-MacFarlane to be lacking in political judgement, but was aware that by 1944 he had serious health problems. These forced him to resign his post, and go on sick leave. As a schoolboy he had broken his neck. Later a fall, pigsticking, injured his back, and a motor accident broke a number of ribs close to the spine. From about 1940, as a result of these injuries, he suffered increasing paralysis. By 1944 he was in constant pain. The rest of his life was a tragic tale of operations and increasing disability. Nevertheless, in the general election of 1945, moved by a long-standing lack of sympathy with the Conservative Party, he stood as Labour candidate for the constituency of North Paddington and defeated Brendan Bracken, one of Churchill’s closest allies. He was mentioned as a possible secretary of state for war, but his health forced him to resign his seat in October 1946. He died on 12 August 1953 at his home, Scarlett’s Farm, Kiln Green, Twyford, Berkshire.

Mason-MacFarlane has been described by one who served under him (and later became a field marshal) as a near-genius. He was a very fine fighting soldier, with an acute brain, a realistic understanding of people and events, and a gift of lucid exposition. He was also a fine linguist, speaking excellent French and German, and some Spanish, Hungarian, and Russian. He was an outstanding athlete. To his staff Mason-Mac was a most inspiring leader. He had the panache and idiosyncrasy which focus, but also the common touch which retains, the loyalty of troops. He was impetuous to the point of appearing reckless. Less well liked by contemporaries and his superiors, he was too often right, and there was a sarcastic edge to his tongue. He had, too, a full share of personal ambition. In the last resort, there was, perhaps, some lack of judgement. But of his dynamism, will-power, and courage there was never any doubt.