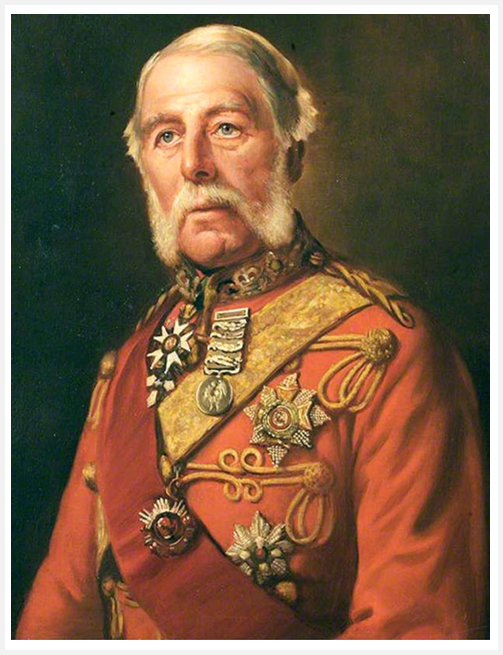 He attended the junior department of the Royal Military College, Sandhurst, from 13 August 1815 to 31 March 1821, was appointed ensign without purchase in the 34th foot on 15 March 1821, and purchased advancement to lieutenant in the regiment on 4 December 1823. Airey went on half pay as a captain (22 October 1825) and re-entered the 34th in that rank through purchase (11 June 1826). Meanwhile, he had joined the senior department at Sandhurst on 6 February 1826, gaining his certificate of qualification on 14 December. Airey served as aide-de-camp to Lieutenant-General Sir Frederick Adam in the Ionian Isles (1827-30), then as military secretary to the governor- and commander-in-chief of British North America, Lieutenant-General Lord Aylmer, until 1832. He purchased his majority in the 34th (9 May 1834), and similarly became lieutenant-colonel (10 February 1838). While commanding his regiment in Canada, he introduced an evening meal for the men and opened a regimental canteen, innovations later adopted throughout the army. On 31 January 1838 Airey married his cousin the Hon. Harriett Mary Everard, third daughter of his maternal uncle, James Talbot, third Lord Talbot of Malahide, and his wife, Anne Sarah, nee Rodbard. He relinquished command of the 34th to go on half pay on 13 February 1847. Probably at this time, and possibly after a short spell at the Horse Guards in London, at the request of his uncle Colonel the Hon. Thomas Talbot, who had no heir for his extensive estate there, Airey settled his family in the ‘backwoods’ of Ontario, but found the life ‘not to his taste’ (Wolseley, 2.244).

Airey returned to full-time service at the Horse Guards on 1 February 1851 as assistant adjutant-general, then as deputy quartermaster-general. Promoted colonel (11 November 1851), he was appointed military secretary to the commander-in-chief, Lieutenant-General Lord Hardinge, the following year. Offered a post on Lieutenant-General Lord Raglan’s staff at the outset of the Crimean expedition in the spring of 1854, he opted instead for command of a brigade in the light division. Raglan recorded that, when Airey visited him in Bulgaria during June 1854, he was ‘quite well but the air and the sun have made sad havoc with his complexion and he is very, very grey’ (Sweetman, 199). Major-General Lord Ros fell ill shortly before the troops landed in the Crimea, so on 1 September 1854 Brigadier-General Airey was appointed quartermaster-general at Raglan’s headquarters, with responsibility for ‘the quartering, encamping, marching, embarking and disembarking of troops’, together with the enforcement of camp regulations, production of maps and surveys, and gathering information about enemy troop deployments and intentions (Airey, 32).

During the skirmish at the Bulganek River on 19 September 1854 and the battle of the Alma the next day, in accordance with accepted practice, he issued orders on Raglan’s behalf. As the commander and his staff rode east of Sevastopol on 25 September during the allied flank march towards Balaklava, Airey’s quick thinking prevented Raglan from stumbling into a Russian force marching out of the city. Once the British and French armies took possession of upland to the south of Sevastopol, Airey favoured an immediate assault, fearing (correctly, as it transpired) that otherwise they would be stranded on exposed heights for the winter. Following Raglan’s instructions, he wrote out the order which led to the fateful charge of the light brigade on 25 October 1854, but unfortunately in the heat of battle kept no duplicate. Subsequently, he had to request a copy from Lieutenant-General Lord Lucan, the cavalry division’s commander, to whom the order was addressed and who strongly resented implications that he was at fault. In writing and in person Airey attempted to placate Lucan, reputedly arguing that ‘it is nothing to Chillianwallah’ (Woodham-Smith, 269), a disaster in India five years previously caused by misinterpretation of an order to the cavalry. During the battle of Inkerman on 5 November 1854 and several actions in co-operation with the French against the fortifications of Sevastopol in the early months of 1855, Airey issued orders on Raglan’s authority, and he frequently attended allied planning conferences as British representative. After a storm on 14 November 1854 destroyed crucial supplies and equipment, the British commander commended Airey for his ‘unceasing energy and indefatigable exertions’ to make good the deficiencies (Hibbert, 216). To Raglan’s daughter Charlotte in April 1855, however, Airey admitted strain: ‘My eyes are almost out-very dim indeed … I am really as weak as an old cat’ (Sweetman, 302). Two months earlier Raglan had praised Airey’s devotion to duty when ‘suffering under severe illness … caught on a wet and tempestuous night’ (Hibbert, 255).

Airey was promoted major-general on 12 December 1854, and local lieutenant-general on 30 July 1855. In press and parliament, however, he was attacked for doing nothing to ease the sufferings of men and horses before Sevastopol during the bitter winter of 1854-5, and his removal from office demanded. Raglan, to whom Airey in turn was fiercely loyal, defended him by emphasizing that provision of food and forage was the exclusive province of the civilian commissariat, over which his quartermaster-general had no control: ‘I consider his services invaluable’ (Hibbert, 232). Airey was at Raglan’s bedside when he died on 28 June 1855, and may have been the last to speak to him before he lapsed into unconsciousness. Raglan’s successor in command, Lieutenant-General Sir James Simpson, declared Airey ‘very much vilified … nor do I have any fault to find’ with him (Sweetman, 300). Airey left the Crimea in November 1855 at his own request, subsequently being made a member of the Legion d’honneur (third class), and receiving the military order of Savoy (first class) and the Mejidiye (second class). A financial award of £100 per annum for ‘distinguished services’ in the Crimea dated from 23 October 1854, and he was appointed KCB on 5 July 1855.

On 26 December 1855 Airey went back to the Horse Guards as quartermaster-general and swiftly faced ‘blame … inferentially cast upon me’ (Airey, 1) in the second of two reports (dated 1 January 1856) from Sir John McNeill and Colonel Sir Alexander Tulloch, who had been sent out to investigate allegations of incompetence in the provision of supplies and transport in the Crimea. Airey and others ‘animadverted upon’ (ibid., viii) demanded an inquiry, and a board of general officers under Lord Seaton consequently met at Chelsea Hospital in May 1856. Before it, Airey challenged the competence of authors who erroneously believed ‘the functions of my department extended to almost every kind of business connected with the army administration’ (ibid., 34) and the validity of conclusions ‘obtained by collating numerous intricate accounts and statements, without the advantage of oral explanation by the persons concerned’ (ibid., 24). Taking each allegation in turn, he demonstrated either its dubious foundation or its irrelevance to his department. The board exonerated him, though embittered critics denounced the findings as a whitewash. Privately, Airey dismissed McNeill and Tulloch as ‘a damned doctor and a colonel who had never been under any hotter fire than that of his own office fire in London’ (Wolseley, 2.240).

Airey remained at the Horse Guards as quartermaster-general until 1 November 1865, then went to Gibraltar as governor and commander-in-chief for five years. Meanwhile, he had advanced to substantive lieutenant-general (14 October 1862), and been appointed GCB in March 1867 and colonel of the 17th foot (20 July 1860), moving to the 7th foot in the same capacity (1 May 1868). He returned to the Horse Guards as adjutant-general from 1 October 1870 to 1 November 1876, was promoted general on 9 April 1871, and on 29 October 1876 created Baron Airey of Killingworth, Northumberland, on retirement from office. Three years later he presided over a committee on the operation of the short-service system, recently introduced. Its report, presented in 1880, reflected Airey’s military conservatism by recommending a minimum eight years with the colours, which would have undermined the new arrangement. As colonel of the 7th foot Airey also strongly opposed replacement of numerical titles for regiments by geographical designations. Airey died on 14 September 1881 at The Grange, Great Bookham, Leatherhead, Surrey, home of Lieutenant-General Sir Garnet Wolseley, survived by his daughter Katherine Margaret, wife of Sir George Cotterell. Airey and his wife, who died on 28 July 1881, were buried in Kensal Green cemetery, London; his title became extinct.

William Howard Russell, the war correspondent, describing Airey’s frequent visits to the camps, trenches, and defence works in the Crimea during April 1855, noted that his ‘presence and direction infused an amount of energy’ into those around (Bentley, 177). Wolseley, who joined Airey’s department in the Crimea, later served under him at the Horse Guards, and became a personal friend, believed him ‘the wisest and ablest soldier it was ever my lot to do business with … thoroughly educated in the science, as well as conversant with the practice of his profession … cool, collected, never excited’ (Wolseley, 2.242-3). He also referred to his ‘courtly and reserved dignity … his old-world and stately manners’ (ibid., 2.242) coupled with a self-deprecating sense of humour. Professionally, Airey demanded high standards; and, once orders had been delivered, expected officers to show initiative in carrying them out.