Gibraltar Governor Robert Biddulph (Sir Robert Biddulph), (1835-1918), army officer, was born on 26 August 1835 in London, the second son of Robert Biddulph MP JP, of Ledbury, Herefordshire, and his wife, Elizabeth, daughter of the philanthropist George Palmer MP, of Nazeing Park, Essex. He entered the Royal Military Academy, Woolwich, in 1850, and passed into the Royal Artillery in 1853. In the following year he went to the Crimea, and served at the Alma, Balaklava, and the siege of Sevastopol. 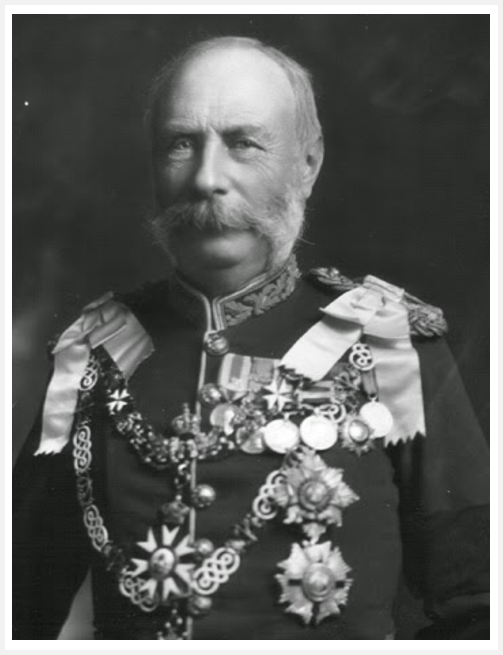 In the Indian mutiny Biddulph was on the staff of Sir Colin Campbell as brigade major during the siege and capture of Lucknow. At this period he met Garnet Wolseley, with whom he formed a lifelong friendship. After Lucknow he joined the staff of Sir James Hope Grant as deputy assistant adjutant-general, Oudh field force, and, with the rank of captain, accompanied Hope Grant to China in 1860. He served in all the actions of the campaign which terminated in the fall of Peking (Beijing). He returned to India, and was promoted major in 1861 and lieutenant-colonel in 1863. Biddulph married in 1864 Sophia (d. 1905), daughter of the Revd Anthony Lewis Lambert, rector of Chilbolton, Hampshire, and widow of Richard Stuart Palmer of Calcutta. They had four sons and six daughters.

Biddulph returned to England in 1865 and served as assistant boundary commissioner for the Reform Act (1867). In 1871 he was called from the staff at Woolwich to be private secretary to Edward Cardwell, secretary of state for war, and contributed to Cardwell’s reforms. He had previously thought much on army reform, and Cardwell, recognizing his qualities, appointed him assistant adjutant-general at the War Office, where he remained until 1878, having been promoted colonel in 1872.

In 1878 Biddulph was selected for special service in Cyprus under Sir Garnet Wolseley, and in the following year he went to Constantinople as commissioner to arrange the financial details under the Anglo-Turkish convention of 1878. On Wolseley’s departure for South Africa a few months later, Biddulph succeeded him as high commissioner and commander-in-chief in Cyprus, where his activities included reform of the currency, administration of justice and taxation, anti-locust measures, and public works. In 1883 he was promoted major-general. He was popular in Cyprus, and the imperial government offered him a higher appointment in Natal which, for family reasons, he declined. He went home in 1886 to take up the post of inspector-general of recruiting. He was made lieutenant-general in 1887 and general in 1892.

Biddulph was director-general of military education from 1888 to 1893, and in 1893 briefly quartermaster-general. From 1893 to 1900 he was governor and commander-in-chief at Gibraltar, where he was concerned with currency reform, and also responsible for rearmament and the construction of new harbour and dockyard works.

Biddulph returned to England in 1900, and later was president of the court of inquiry on the administration of the army remount department, investigating alleged corruption during the South African War. In 1904 he published Lord Cardwell at the War Office, an adulatory, but useful, account. Also in 1904 he was appointed army purchase commissioner, the last person to hold that office, and as such he completed one of Cardwell’s great reforms, the abolition of the purchase of commissions. In 1914 he succeeded Lord Roberts as master gunner of St James’s Park.

Biddulph’s forte was administration, but his military qualities were also considerable. Throughout his life he was guided by strong religious principles. He was created KCMG (1880), GCMG (1886), and GCB (1899). He died at his residence, 83 Cornwall Gardens, Kensington, London, on 18 November 1918, and was buried in Charlton cemetery, Woolwich.