Gibraltar Governor Robert Boyd (Sir Robert Boyd) (bap. 1710, d. 1794), army officer, was baptized on 20 April 1710 at Richmond, Surrey, the son of Ninian Boyd (b. 1664) and his wife, Susanna Johnston. In later life he referred to ‘an old college friend at Glasgow’ (BL, Add. MS 24163, fols. 37-8), and he was probably the Robert Boyd who was entered as an ‘Anglo-Scottus’ at Glasgow University in 1726. In 1739 Boyd succeeded his father as the board of ordnance storekeeper at Port Mahon, Minorca, a post he held until the loss of the island to the French in 1756. According to a memorial written by Boyd in 1750, for the previous twelve years he had ‘done the duties of deputy judge advocate and deputy commissary of the musters’ (BL, Add. MS 32721, fol. 31) in Minorca for Sir Anthony Wescombe. Wescombe wanted to resign these offices to him. During the siege of Minorca on 19 May 1756 Boyd made a heroic attempt to reach Admiral John Byng’s fleet in an open boat with a message from the garrison commander, General William Blakeney. Consequently he was called as a witness at Byng’s court martial. 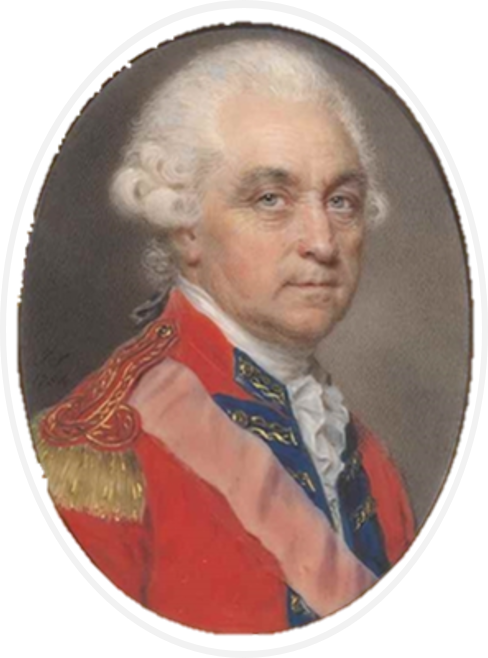 On 25 March 1758 Boyd was made a lieutenant-colonel; he then served five campaigns on the staff of the marquess of Granby as commissary general to the Hessian troops serving as part of the allied forces in Germany under the command of Prince Ferdinand of Brunswick. From the German campaign he wrote detailed letters to his political masters in England. It was apparently Boyd’s back upon which Prince Ferdinand scribbled the news of his victory at Minden in August 1759 which Boyd took to England. On 13 January 1760 he bought a company in the 1st foot guards. At this time he narrowly avoided being promoted to command a regiment in India, Lord Clive recommending him as ‘one of the best, if not the best officer in the King’s service’ (Russell, 34). Boyd claimed thirty-two years’ service abroad in 1762, and with peace in the offing he attempted to secure future employment; firstly he hoped to be employed with the Hessian troops until their contract ended in the summer of 1763: ‘this doceur’ (BL, Add. MS 38200, fol. 91) would help him furnish his new house in Queen Anne Street in London. His ultimate aim was a governorship which would allow him to retire to England on an income not dissimilar to that he had enjoyed in Minorca. In 1764 Boyd was enlisting Prince Ferdinand in his quest for employment. On 18 September 1765 Boyd exchanged his company of guards for one in the 39th foot regiment, of which he became colonel on 6 August 1766. On 25 May 1768 he was named lieutenant-governor of Gibraltar, where his regiment had been posted. He became a major-general in 1772.

In May 1773 Boyd landed back on Gibraltar, and as acting governor began work on the ‘king’s bastion’, a fortress able to accommodate 800 men and twenty-six cannon and mortars. Boyd was still there in 1776 with a new governor, General George Augustus Eliott, not yet arrived.

In August 1776 he referred to his family being with him; but little is known about his wife, Arabella (d. 1791), except that she was similar in age to her husband. Boyd finally left in spring 1777, the year he was promoted lieutenant-general. He returned to play a key role in the defence of besieged Gibraltar from 1779 to 1782 and suggested the use of red hot shot to disable the enemies’ floating batteries. Political faction was rife in the garrison, with Boyd a noted client of the opposition in parliament (John Pitt, second earl of Chatham, had served as his aide-de-camp); one of his enemies, Colonel Charles Ross, called his troops the ‘storekeepers regiment’ (Russell, 83), and Boyd was often at loggerheads with Governor Eliott.

With the siege over, Ross even objected, unsuccessfully, to the inclusion of Boyd’s name in an address of thanks from the House of Commons in December 1782. However, Boyd had to act as royal commissioner when Eliott was installed with the Order of the Bath in April 1783. On 28 January 1785 Boyd was himself made a knight of the Bath, but he had to wait until 19 May 1788 for his investiture. In January 1791 Boyd was back in Gibraltar as governor, leaving his wife at home for she died at Albyns, Essex, on 12 November 1791. He attained the rank of general on 12 October 1793. Boyd died in Gibraltar on 13 May 1794, aged eighty-four, and was buried in the king’s bastion. His will mainly dealt with his stock in three per cent consolidated Bank of England annuities, the beneficiaries being nieces and nephews.