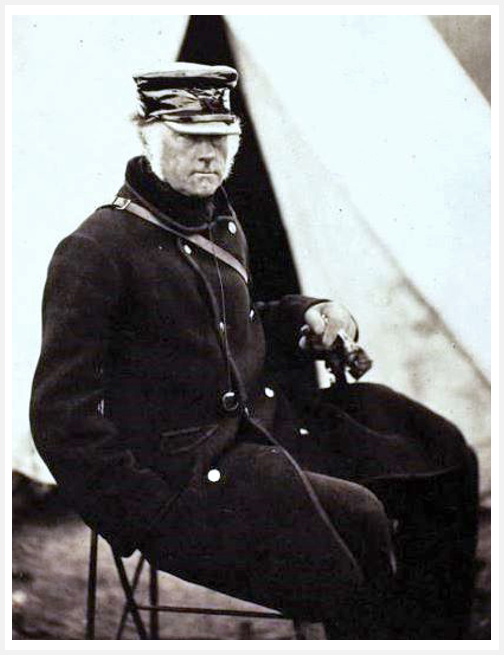 Codrington served with the 2nd battalion in Canada from 1838 to 1842, arriving back at Spithead on 31 October. Having become a brevet colonel on 9 November 1846, Codrington embarked with the 1st battalion Coldstream Guards at Southampton for Malta on 22 February 1854 as part of the British expeditionary force under Lord Raglan. After a brief stay on Malta the battalion reached Scutari on 29 April, and, as an acting regimental major, Codrington subsequently landed with it at Varna on 13 June. Seven days later, promoted major-general, he left the Coldstreams but remained in Bulgaria. When Brigadier-General Richard Airey succeeded Lord de Ros as Raglan’s quartermaster-general, on 1 September Codrington took over the 1st brigade of the light division, comprising the 7th, 23rd, and 33rd regiments.

The combined British, French, and Turkish force landed on the Crimean peninsula on 14 September. Short-sighted, but not too vain to wear glasses, six days later Codrington led his brigade into battle at the Alma, where the Russians occupied high ground on the far bank astride the post road to Sevastopol. On the left of the allied line, the light division faced the dominant Kurgan Hill with two prominent redoubts, supported by infantry and field artillery. Having forded the river under heavy fire, on Codrington’s order, ‘Fix bayonets! Get up the bank and attack’ (Glover, 71), the brigade advanced uphill to capture the Great Redoubt and two of its fourteen guns left by the defeated enemy. A Russian counter-attack was then wrongly identified as French by an unknown staff officer and, overwhelmed, Codrington’s three battalions fell back towards the river to reform and advance once more, as the brigade of guards from the 1st division passed through them to retake the redoubt. The Times’s correspondent William Howard Russell wrote: ‘The brunt of the action was borne by a brigade of the Light Division … they advanced against the strongest point of the enemy’s works and over the most difficult ground’ (Thomas, 164).

Raglan commended Codrington’s initiative and courage at the Alma and noted, too, his ‘admirable behaviour’ (Cary and McCance, 84) during the battle of Inkerman on 5 November. Visiting outlying pickets in the pre-dawn mist, Codrington realized that an enemy attack was developing and spurred back to warn divisional headquarters. He remained with his brigade on Victoria Ridge throughout the ensuing action, engaging Russian troops in and across the critical Careenage Ravine. When Lieutenant-General Sir George Brown was wounded, as senior brigade commander Codrington took over the light division and retained its command until Brown returned to duty on 22 February 1855. He received a vote of thanks from both houses of parliament and, on 19 January 1855, an award of £100 per annum ‘for distinguished service’, backdated to 15 September 1854. Codrington attended the St David’s day dinner of the 23rd (Royal Welch Fusiliers) on 1 March 1855, during which Lieutenant-Colonel David Lysons toasted his health: ‘There was a grey horse … at the Battle of Alma … [which] carried an officer [Codrington] who, by his example and cheery voice, encouraged the men of the regiment in the moment of extreme danger’ (ibid., 90). On 5 July 1855 Codrington was made KCB, being presented with the award in the field by Lord Stratford de Redcliffe. On 30 July he became local lieutenant-general.

Preceded by a three-day bombardment, on 8 September a major assault was launched against Sevastopol, with the French attacking the Malakhov on the far right and the British the Redan to their immediate left, which meant crossing almost 300 yards of open ground. The plan, drawn up by Codrington and Major-General Frederick Markham commanding the 2nd division, envisaged the first columns being quickly supported, but cross-fire from undamaged enemy batteries prevented this, and the attack failed. However, as the French decisively took the Malakhov, that night the Russians evacuated the southern part of Sevastopol in front of the allied lines. After Raglan’s death in June, General Sir James Simpson assumed command of the army, but resigned four months later. Codrington took his place as commander-in-chief on 11 November 1855, still only a substantive major-general but promoted local general on 29 October 1855. Captain Temple Godman of the 5th dragoon guards wrote: ‘Most people speak well of him, I have heard he is very active’ and that he had been ‘not to blame … for the unfortunate affair at the Redan’ (Warner, 189). Shortly after taking command, Codrington ruled that all war correspondents thought likely to aid the enemy by publishing sensitive military information should leave the Crimea. An armistice at the end of February effectively ended the fighting, and on 24 March Codrington invited Russian officers to a celebratory race meeting near the Chernaya River. He left the Peninsula on 12 July 1856, having received another parliamentary vote of thanks and been promoted lieutenant-general on 6 June 1856. Before he sailed, he also received the thanks of the Tartars of the Baidar valley for the protection given to them by the British troops. Despite serving throughout the war and being frequently in action, Codrington had neither been wounded nor suffered serious illness.

On his return to England, Codrington became colonel of the 54th foot on 11 August 1856 and Liberal MP for Greenwich in 1857. He supported Palmerston’s foreign policy, moderate reform, and civil and religious liberty, but opposed the secret ballot. He was governor and commander-in-chief at Gibraltar from May 1859 until November 1865, promoted general on 27 July 1863, and made GCB on 28 March 1865. He became colonel of the 23rd foot on 27 December 1860 and of the Coldstream Guards on 16 March 1875. He reputedly twice refused the rank of field marshal.

Codrington unsuccessfully contested parliamentary elections at Westminster in 1874 and Lewes in 1880, and for many years he was an active member of the Metropolitan Board of Works. He was a commander (third class) of the Legion d’honneur, knight grand cross of the military order of Savoy, and a member of the order (first class) of the Mejidiye. As a former governor of Gibraltar, he was twice drawn into controversy over its future. Writing to The Times on 3 February 1869, he deplored a proposal to exchange Gibraltar for Spanish-held Ceuta. To surrender it in this way would imperil other isolated parts of the empire such as Malta, Singapore, and Hong Kong, as well as the Channel Islands. Resurrection of the idea in 1882 caused re-publication of the letter, with a covering note from Codrington, as the article ‘Gibraltar and Ceuta’ in an anonymously edited collection of papers, Egypt, Tunis etc, 1881-1883. He died at Danmore Cottage, Heckfield, near Winchfield, in Hampshire, during the afternoon of 6 August 1884. Of his children, only Arthur Edward, then a brevet major in the Coldstream Guards, and Mary, widow of Major-General William Earle, survived him. Codrington was buried with full military honours at Woking on 9 August.