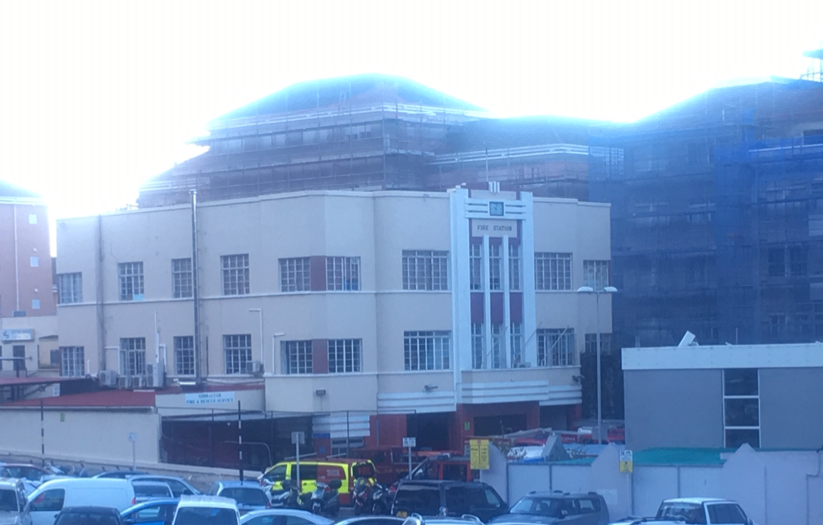 In 1937 – 1938, the new fire station at Alameda Grand Parade was completed and staffed by 1 Sargent and 24 Firemen.
History of Gibraltar Fire & Rescue Service

Prior to 1865 there was no Fire Brigade as such in Gibraltar, fire fighting being carried out by the Military, Fire engines were stationed at strategic points in Gibraltar. In 1865 the Sanitary Order in Council set up the Sanitary Commissioners placing upon them the responsibility of; “the prevention and extinction of fires”. The Order in Council also authorised the Governor to make from time to time, Rules and Regulations for the extinction and prevention of fires. 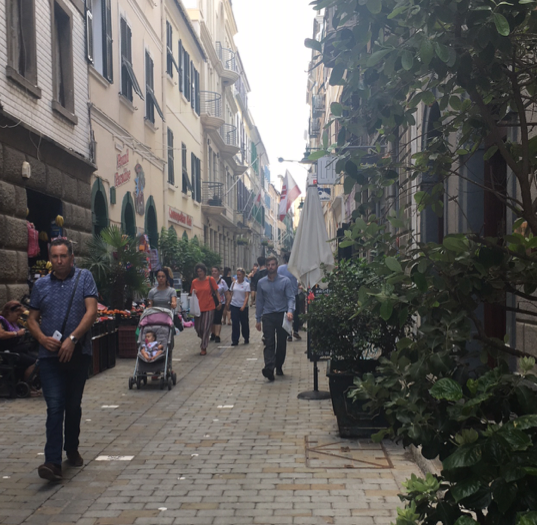 Irish Town is a pedestrianised street and is one of Main Street’s sub-districts running parallel to it, from Cooperage Lane in the north to John Mackintosh Square in the south.

The origin of the Irish Town name which dates back to the early 19th century when Gibraltar was split into differing quarters. It was once thought that the name was attributed to Irish merchants residing in Gibraltar who had their properties and warehouses on the street, but the property owner lists of 1749 and 1777 show Irish names listed as living in Main Street and not Irish Town.
It is more likely however, that it acquired its name from an Irish regiment that was barracked at this street, probably in the White Cloisters.
An 18th century visitor to Gibraltar called Irish Town “a street of ill repute” and it is possible that the ladies who plied their trade were originally from that Irish regiment. 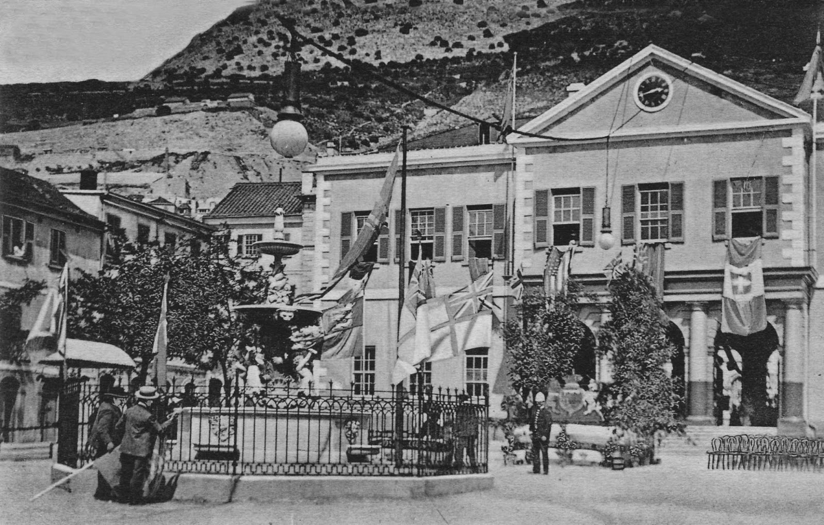 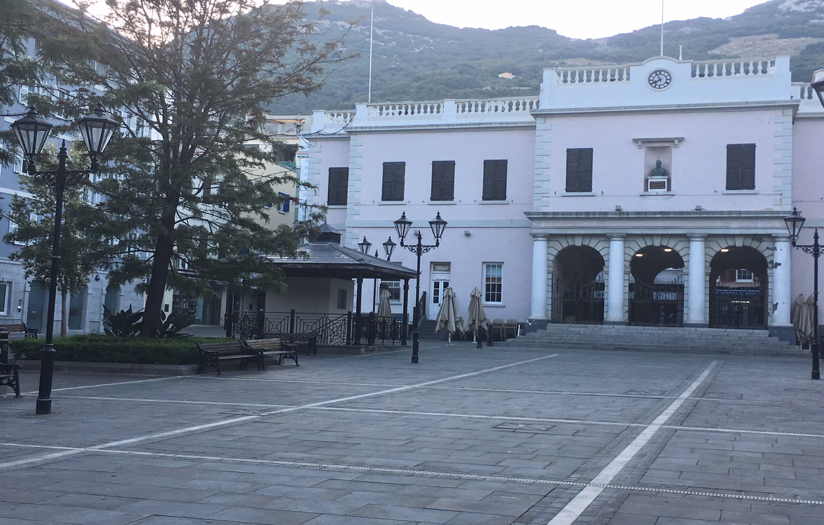 Originally known during the Spanish period as Plaza Mayor and afterwards as the Alameda (Spanish for an avenue lined with poplars, it opened out from the west of Main Street. Two buildings separated it from the Line Wall (Gibraltar’s main sea wall during the Spanish period, which run from Landport to the foot of the South Mole): a large rectangular building to the west of the Square, and a smaller lower building to the south of it, the hospital and chapel of La Santa Misericordia (The Holy Mercy).
During the first century of the British period, the square was used for military parades by the garrison and therefore known as the Parade or Grand Parade.
In 1704, after the city’s capture by an Anglo-Dutch fleet, the British converted the hospital and chapel of La Santa Misericordia into a debtors’ prison.
The square was also where military punishment in the form of floggings took place.

During the second decade of the 19th century, the Square’s two most prominent buildings were constructed.
In 1817 local merchants raised money by public subscription to construct a building to house the Exchange and Commercial Library. It housed, not only a library, but also an auction room and became the meeting place of local merchants. In 1951, the building was refurbished to host the Legislative Council, which in 1969 become the House of Assembly. Since 2006, the building hosts the Gibraltar Parliament.
In 1819 on the opposite side of the square, Aaron Cardozo, a prosperous merchant built the grandest private mansion ever seen in Gibraltar. The three-storey house dominated the square. It was erected on the site of the old hospital and chapel of La Santa Misericordia that the British had converted to a prison. As a non Protestant, Cardozo was not legally allowed to own property in Gibraltar. Being a close friend of Horatio Nelson, and having supplied his fleet, he was eventually granted a site to build a house in the Alameda.
Today, Cardozo’s mansion has become the Gibraltar City Hall and houses the Mayor’s Parlour.

In 1571, an aqueduct was built to channel drinking water from the Red Sands in the south district to the city. A fountain at the northwest corner of the square (the steps now called Fountain Ramp, Spanish Callejón de la Fuente, to the north of where the City Hall is today) was supplied by this aqueduct. Although the aqueduct fell into disuse some years later, with the fountain drying up, the fountain head was refurbished in 1694. It was moved to Castle Street in 1887 and remained there until the 1960s. It was eventually re-erected on the Line Wall against Zoca Flank some 20 metres (66 ft) to the northwest of its original location (four lion-headed vents were carved in the low part of the fountain, representing war, pestilence, death and peace).
In 1869, a new fountain was erected by the Sanitary Commission, fed from wells in the isthmus that links Gibraltar with Spain to supply drinking water. It was inaugurated by Lady Airy, wife of Gibraltar Governor Sir Richard Airey on 8th December. The fountain was replaced in 1879 by an ornamental fountain constructed to commemorate the Duke of Connaught — third son of Queen Victoria — stay in Gibraltar.
It was dismantled during World War II.

In 1939 excavations were carried out for the construction of an air-raid shelter under John Mackintosh Square. These excavations revealed no prior building foundations, suggesting the Square has been an open plaza for its entire 600+ year history.
Today, part of the underground shelter houses the square’s public toilets. 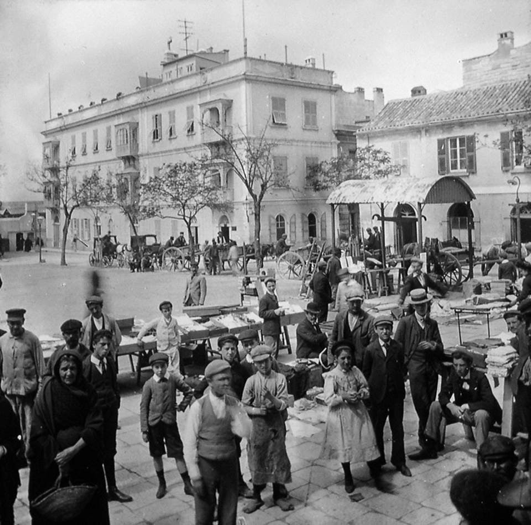 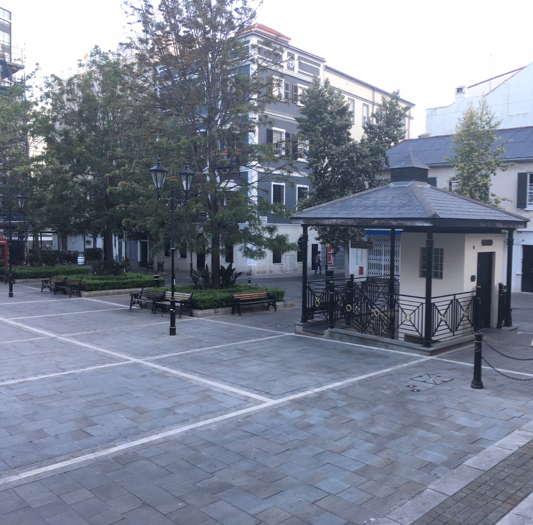