At the start of the siege, Gibraltar was garrisoned by around 2,000 Dutch, English, Austrian and pro-Habsburg Spanish troops facing a besieging force of up to 8,000 French, pro-Bourbon Spanish and Irish troops. The defenders were able to hold off the numerically superior besieging force through exploiting Gibraltar’s geography and the small town’s fortifications, though they were frequently short of manpower and ammunition. The besiegers were undermined by disputes between the French and Spanish officers and terrible conditions in their trenches and bastions, which led to outbreaks of epidemic disease and undermined morale. Sea power proved crucial, as the French navy sought unsuccessfully to prevent the Grand Alliance shipping in fresh troops, ammunition and food. Three naval battles were fought during the siege, two of which were clear defeats for the French and the last of which resulted in the siege being abandoned as hopeless after nine months of fruitless shelling. The outcome was disastrous for the French and Bourbon Spanish side, which was said to have lost 10,000 men against only 400 for the Grand Alliance. 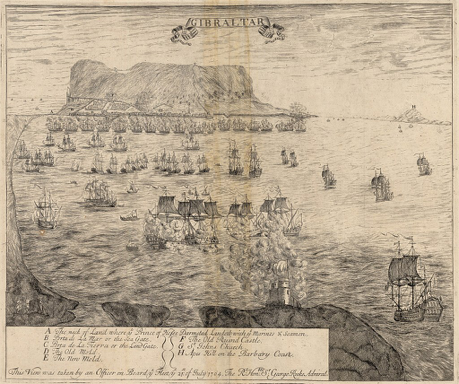 CAPTURE OF GIBRALTAR – THE 11th SIEGE

CAPTURE OF GIBRALTAR – THE 11th SIEGE