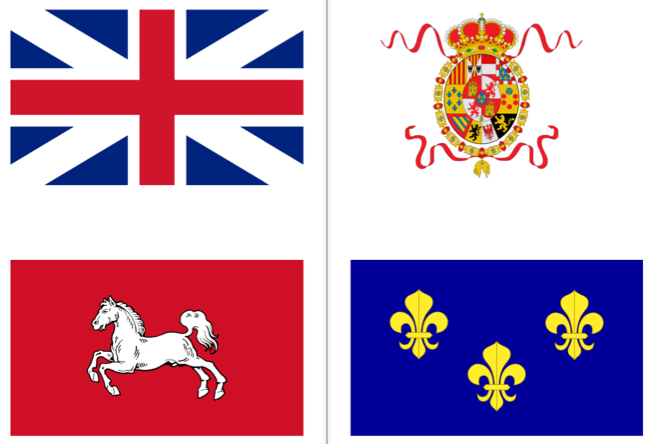 The Great Siege of Gibraltar (the fourteenth and last military siege of Gibraltar), was the longest (3 years & 7 months) and most famous of Gibraltar’s sieges. It was an unsuccessful attempt by Spain and France to capture Gibraltar from the British during the American War of Independence which broke out in 1775. This was the largest action fought during the war in terms of numbers, particularly the Grand Assault of 18 September 1782.

In 1779, Spain allied with France and declared war on Britain, the primary ambition of which being to recover Gibraltar. Bearing in mind the futility of previous sieges in which Gibraltar had been blockaded only by land, the Spanish launched a combined land and sea blockade in an attempt to starve the garrison into surrender. They bribed the sultan of Morocco into severing trade with Gibraltar and built booms to prevent ships landing supplies, while simultaneously blockading the isthmus with over 13,000 men, where work began on rebuilding the batteries from the previous siege 50 years earlier.

From the summer of 1780, Spanish forces attempted to bombard Gibraltar with fire ships and gunboats, while the British attempted to devise ways of frustrating these attacks as well as bombarding the Spanish camp with the few cannon that could reach. The Spanish bombardment continued throughout the siege, though slackening at times, but the naval blockade was intermittent, meaning that merchants were able to land and sell supplies to the garrison, preventing it from being starved into submission. The merchants also conveyed those civilians who could afford it away from the Rock, and so the civilian population gradually declined. The siege concluded after Britain ceded East and West Florida and Minorca to Spain in exchange for Gibraltar in lengthy negotiations facilitated by France.

1779, July  –  Start of the Siege. French and Spanish forces tried to wrest control of Gibraltar from the established British Garrison. The garrison, led by George Augustus Eliott, later 1st Baron Heathfield of Gibraltar, survived all attacks and a blockade of supplies.

1783, February  –  By now the siege was over, and George Augustus Eliott was awarded the Knight of the Bath and was created 1st Baron Heathfield of Gibraltar. The Treaties of Versailles which ceded Minorca and Florida to Spain, reaffirmed previous treaties in the rest of issues, thus not affecting to Gibraltar.

1782  –  Work on the Great Siege Tunnels started. The tunnels became a great and complex system of underground fortifications which nowadays criss-crosses the inside of the Rock. Once the Siege was over, the fortifications were rebuilt and, in the following century, the walls were lined with Portland limestone. Such stone gave the walls their present white appearance.

The successful resistance in the Great Siege is attributed to several factors: the improvement in fortifications by Colonel (later General Sir) William Green in 1769; the British naval supremacy, which translated into support of the Navy; the competent command by General George Augustus Elliot; and an appropriately sized garrison. As in the early years of the British period, during the Siege the British Government considered to exchange Gibraltar for some Spanish possession. However, by the end of the Siege the fortress and its heroic response to the siege was now acquiring a sort of cult status amongst the population in Britain and no exchange however attractive, was likely to be acceptable.