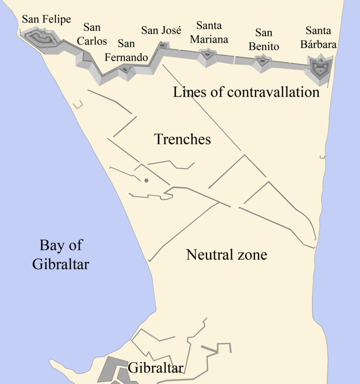 The Governor of Gibraltar removed the Spanish forts of San Felipe and Santa Barbara, located on the northern boundary of the neutral ground. Fearing that the forts might fall into French hands, Lieutenant General Sir Colin Campbell instructed Royal Engineers to blow the forts up. Such a task was carried out on 14 February together with the demolition of the rest of the fortifications of the Spanish Lines. On the evening of 14 February 1810, thousands of people crowded onto Gibraltar’s walls and bastions to watch the demolitions taking place.

The London Chronicle noted, “every part of the garrison facing the Spanish Lines was crowded with Spectators, to witness the explosion which was truly grand and picturesque … the entire front of [Forts San Felipe and Santa Bárbara] being blown into the ditch, and the whole rendered a complete mass of ruins.” The line of fortifications between the two forts was also demolished, along with various other Spanish fortifications around the bay. The debris was hauled away by volunteers from Gibraltar, British soldiers and allied Portuguese sailors from ships in the bay. The demolition achieved its desired objectives; the lines could no longer be used to besiege Gibraltar and they could not be rebuilt by the French without enduring British cannon fire and Spanish guerilla attacks in their rear lines. The French made no attempt to attack Gibraltar and focused their efforts on Cádiz and Tarifa instead.

Image: Spanish Lines at the time of the Great Siege of Gibraltar (1779–83) Click here to enlarge 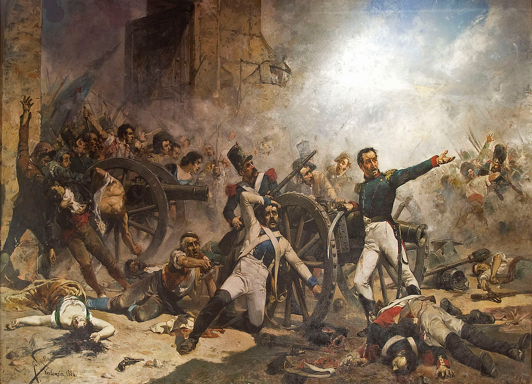